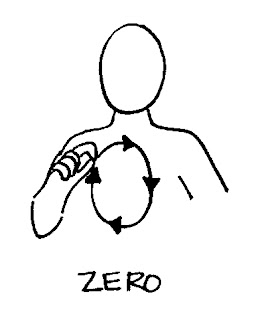 The primeval Master closed his eyes and contemplated for a while. After he was done pondering over this question ... an answer to which would change the course of human history, he opened his eyes again, picked up a piece of charcoal and  scribbled something on the parchment, that lay on the ground. Having done this, he stared at his handiwork in amazement and wonder.

The primeval Ghot peered into the parchment expecting to see something out-of-the-ordinary scribbled in that, and was quite disappointed when he saw that it was nothing more than a circle.

"That's it?" he asked incredulously, "a tiny circle?"

The primeval Master smiled back.

Little did the primeval Ghot and his Master know that by this feat, they had actually changed the way societies would evolve thousands of years down the line. Little did they know that they had by this act, shaped the way cultures would function, the sciences would develop and the world would become what it is today.

The little circle which came to being as a result of a simple question posed by the primeval Ghot, is today better known as the zero. Or, if you are BITSian, a zuc.

So why the sudden fascination for this seemingly well-known everyday little object, a fascination that has even compelled me to dedicate an entire blog post to it?

Why indeed? I wonder.

What does the zero denote?

Several things. For one, it is the answer most unsuspecting IITJEE aspirants tick in an OMR sheet, hoping that to be the correct option and then wonder what went wrong. For another, it's the thing that comes back on your answer sheet, in red ink when you submit a blank one. For yet another, it is the thing which when added at the end of your paycheck, increases your worries ten-fold.

To the chemist, the concept of Absolute Zero, the theoretical temperature at which all thermodynamic activity ceases, is of profound interest. To the physicist it is the hearing threshold in decibels, amongst other things which projects zero into its numero-uno status. To the computer science student it is the quintessential role zero plays in binary mathematics and Boolean algebra that makes it so very essential. And to the historian, the year zero is the fulcrum about which the Gregorian calender is pivoted.

To the mathematician ... lets not get into that.

So as you can see the zero is not only ubiquitous, but varied in it's application in the real world.

What else does it denote?

Simply put, another of its applications lies in its usage as a symbol for nothingness, as a symbol for voids,  and emptiness. This application is possibly the biggest feather this beautiful number has in its cap, and the reason why it came to exist in the first place.

Which brings me to the thing I had in mind when I began writing this post.

A queer thing it is. We know what it is, yet we don't understand what it means. 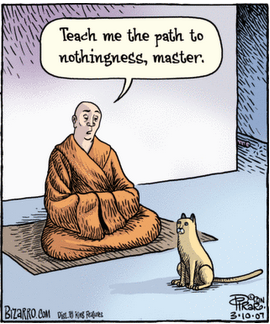 We seem made out of it, yet we fail to embrace it.

We come spinning out of nothingness, scattering stars like dust


We know that that's what is in store for us, yet we don't want it.

If it is nothingness that awaits us, let us make an injustice of it; let us fight against destiny, even though without hope of victory.


It is that which is present everywhere, yet we fail to perceive it.


God made everything out of nothing, but the nothingness shows through.

One only needs to look at it the right way.

Why the hell did I write all this? Forgive me if I've wasted your time all this while. I guess it's the post-Oasis hangover. Need to get some sleep.

PS : my backy shouts and tells me that SENSEX has gone down by 65 points. That's bad.

On a parting note, here's some food-for-thought. 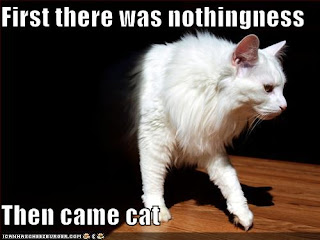 Nethra said…
I didn't understand what exactly does "first there was nothingness and then came the cat" mean.

Anyway, Zero always fascinated me...more than Zero it was the nothingness. And I feel sane for it's not just me who is fascinated by zero.
29 October 2010 at 03:07

pawan said…
For me the last caption means a lot,