Pirates of the Caribbean IV - On Stranger Tides : a review 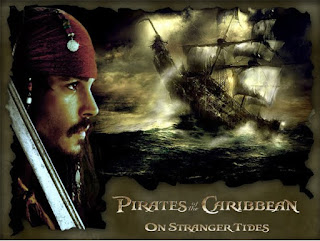 First things, first : the fourth installment of the epic Pirates of the Caribbean saga, was never meant to be one. The original story concluded, fair and square with At World's End, in 2007; but for Johnny Depp, the titular Captain Jack Sparrow, who wanted one last hurrah before it all ended.

And to be honest, the saga could have done without this. For one, Pirates was at its best where it ended : as a trilogy. What Rob Marshall has done is add a piece of camphor to the butt of a glowing cigarette, hoping that it will light up. Instead, it has turned out to be wet patch.

So with this movie, we find our beloved Jack Sparrow in the middle of London, searching for an imposter who has been impersonating him. A lot of swashbuckling heroics follow. He saves his erstwhile first mate Joshamee Gibbs from being hanged. While escaping he is captured by King George II 's men. The king has a conversation with him wherein he is asked to guide an expedition to the Fountain of Youth, headed by his former arch-rival Captain Hector Barbossa. He comes to know that the Spanish have already set sail in pursuit of the Fountain. Sparrow jeopardizes the conversation and escapes, only to meet his father Captain Teague who warns him about the Fountain's tests. Here, after a brief sword fight, the imposter is revealed and it turns out to be Sparrow's former lover, Angelica (Penélope Cruz), the daughter of the ruthless pirate Blackbeard. Following Angelica's ploy, Jack finds himself aboard Blackbeard's ship, the Queen Anne's Revenge, and after a failed attempt to mutiny, Jack is forced into Blackbeard's crew. And as it turns out, Blackbeard too, is headed for the Fountain. While en route, Angelica tells Jack how, in order to be effective, the Fountain's water must be drunk from chalices belonging to one Juan de León, one of which one must contain a tear drop of a mermaid. Legend had it, that the person who drinks from the chalice with the mermaid tear would absorb  the remaining years of the person drinking from the other chalice.

Meanwhile, Gibbs, who had had Jack's map showing the path to the Fountain is taken captive by the king's men. As a desperate last resort to save himself, he memorises the map before burning it in front of them. He is thus asked to guide them, and a race ensues.

What happens thereafter is nothing more than routine drama. Sparrow gets into brawls. A lot of sparks fly. Mermaids come in.

Oh, wait, I must elaborate on this.

Mermaids. Beautiful half human-female-form, half fish-form beings. Their depiction was throughly brilliant. Their attack on Blackbeard's men at Whitecap Bay was portrayed very well indeed, and it was possibly one of the few good heart-in-your-mouth scenes in the movie. The captured mermaid and later, her chemistry with the captive missionary, Phillip Swift formed an essential part in whatever little story there was.

All in all, not the kind of movie one would expect, to follow up on such a saga as Pirates. It certainly does not take your mind out for a ride, but then again, none of the Pirates ever did that. The question is, does it do what was expected of it? Was it the visual treat that PoTC has been synonymous with? Was it the surreal extravaganza that Gore Verbisnky had started out with, in The Curse of the Black Pearl?

Clearly, no. It only does, but half live up to the expectations that an ardent Pirates fan would harbour. Which is what happens when you do something that Marshall so incongruously did. Obliterate two protagonists entirely (did anybody else miss Will Turner and Elizabeth Swann?), take an unrelated and an underrated story, and try to chip it into a chronicle as grand as Pirates, and call it the Grand Finale.

So should you watch the movie? If A, you are a Pirates fan, then you would watch anyways. If B, you are not, and are hesitant on watching it because you haven't seen the earlier ones, then do. Because the story is almost completely unrelated to the first three movies. If C, you are just looking for a good movie to watch, I would half suggest this one. Not fully.

And if you do choose to watch, do not miss Jack Sparrow's dialogues and retorts. They are as witty, as snide, and as epic as ever. Also, do not miss the post-credits scenes. That is one and the only scene that actually makes you think.

For what it was, Pirates of the Caribbean IV : On Stranger Tides was only a swan's song. It was a graceful swan while it lived. But it sure died a very sad death. 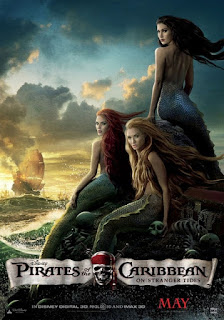 Aravindh said…
Oh crap, I thought they would somehow make it good even with keira and bloom outside. guess I would have to watch this just for depp's performance :)
23 May 2011 at 04:19