If there is one thing that I have gained after seven weeks of summer internship, it is the sound knowledge of the working of Eastern Railways and the Kolkata Metro. This story is a direct culmination of all that knowledge. Also, pardon my Hindi if in some places it is incorrect. (Update : many thanks Vishala Arya for the corrections :P )

Rajat looked up from the magazine he was reading as the automated voice sounded over his head. He gave an exasperated groan, and cursed the Kolkata Metro announcements to himself. A 40 minute trip from one one terminal station to the other, spanning the whole of Kolkata from the south to the north, fraught with annoyances such as cackling automated female voices and sweaty co-passengers, wasn't the sort of start he had been expecting to an internship. Also, he had missed the new air-conditioned metro by a whisker, and that added to his present miseries.

As the train reached a standstill, it struck him, that his destination was now only a few minutes away, so he should better ready himself if he wanted to make the most out of the rush when the sliding doors gave way.

With a lurch, the train pulled away again, and Rajat nearly toppled to one side as he tried getting up. Clinging onto the handlebars, and cursing under his breath he steadied himself on his feet. And simultaneously, the automated female voice cackled once more.

Rajat heaved a sigh. There, that had to be the last of them all.

He looked around. The crowd had thinned considerably. He had been praying and praying that it does. Seeing the exodus of passengers into and from the train at the stations in central Kolkata, he had remained mortally scared of his turn at Dum Dum.

Needless to say, Rajat wasn't the type of person who had frequently availed of public transport during his twenty odd years of his life in this city. He had remained confined to the luxuries of air-conditioned private cars, and rarely would one see him taking a bus or an autorickshaw. At worst, it would be a cab.

He looked out of the windows. It was still as dark as the insides of a blue whale. He had seldom been on the metro, but whenever he had, he had never travelled to the Dum Dum terminal where the new extension of the track made it come up to the surface and then travel in broad daylight. That was one little thing he was looking forward to. The transition from the darkness to the daylight, and how it happened.

A vibration in his right pocket brought him back to his senses, and he heaved a sigh realizing that he had once again come within the usual network coverage of his mobile service provider. The intermittent availability of the network throughout the boring 40 minutes of journeying in the underbelly of Kolkata had given him yet another thing to crib about.

He took out his phone and noticed that it was a text message from a friend, Sup it read. At work?
On the way. Shit crap this thing, he replied, and looked out of the window again, wondering when exactly would he start feeling the ascent.

And then suddenly, there was light all around. He frowned. That's it? The thing just goes out from darkness into light? Without any funny feelings in your tummy. On second thoughts, what else would have happened. I really shouldn't have expected something like a roller coaster here.

A few more minutes later, the train pulled into the station. And once again, the now murderous-feeling-inducing automated voice was back

And the train gave a final lurch and stopped. The doors slid open and the customary rush ensued. Rajat went with the flow and soon found himself on the platform. He looked around, clutching his bag close to his self, before swinging it around and straddling it on his back. He knew that now he had to make his way to the railway station at Dum Dum. He looked around and fortunately saw a big red sign showing the way down the stairs to the same. This close, huh. All good.

The scene at the railway station was chaotic. It had all the attributes of the usual Indian railway station, random filth scattered in random places, malnourished and half naked children sleeping in front of the counters. Beggars and decrepit old men lying neglected. An involuntary shudder went down Rajat's spine as he made his way and stood at the end of the queue at the ticket counter. Thankfully enough, the queue was moving pretty quick and it was within a minute or two that he had bought a two way ticket to Agarpara, his intended destination. Dropping a coin in the pleading hands of a woman in tatters, he made his way to the platform. Credits for afterlife, he smiled. He did not look it, but actually was extremely religious and believed in doing good things to people in return of a grateful smile from them. Doesn't hurt. Does it?

On the stairs up to the platform he stopped at yet another blind old man, and dropped a coin into his steel bowl. On the platform however the scene was healthier. Passengers flocked around. Some aimlessly strolled smoking bidis. Quite a few of them were on the tracks, cutting across it, instead of taking the overhead bridge in their haste. A lungi clad person who was standing a few feet away was making weird facial gestures and holding a glass of what appeared to be water in his hand. Rinsing his mouth, Rajat realised, when the person squirted out the contents inside his mouth onto the track.

He looked around. A few hawkers lined the side of the platform: magazine stalls, tea stalls and the sort. He walked up to the magazine stand and the latest copy of the Top Gear magazine caught his eye. He grinned. Not so bad after all. He turned away and looked at his watch. The next train, the Barrackpore Local was due in less than 5 minutes. He resumed his aimless strolling, checking his watch at regular intervals.

Soon enough, the green and yellow electric locomotive was in sight. It was approaching the platform quite steadily, blaring it's horn now and then. And another cackling voice, and this was far worse in tone than the mildly respectable one in the metro, blared from the loud speakers. 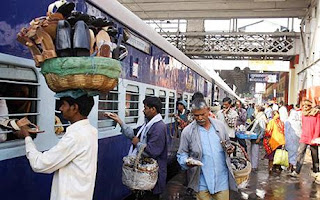 The people who were cutting across the track scattered, and clambered up on to the platforms on either side, as the train lumbered in slowly. These oafs will die like this, Rajat grimaced. Much as he was cautious in most of the things that he did, he loathed cutting across railways tracks. What is the overbridge for then?


When the train had come to a halt, he heaved himself up and was relieved to see it almost empty. He went and occupied a window seat, two seats away from an old man reading a newspaper.

Accha dada, eita Agarpara jabe toh? (This train will stop at Agarpara, right?) he leaned to his right and asked him, just to reassure himself.

The person did not take his eyes of the newspaper, Haan. Duto station pore (yes, two stations from this).

Rajat heaved a sigh and leaned back, took off his bag and placed it on his lap. Shouldn't be a long journey, he thought.

The train had started moving by then, and it steadily kept putting on speed. A candy seller had boarded too, he noticed and he kept moving around, asking one passenger after another. He came to Rajat as well, and thrust his colourful lot of candies at him. Rajat turned him down and gazed out of the window. When was the last time I had boarded a local train? He couldn't recollect. But he was more than glad that this one was not crowded, like the ones he usually saw at level crossings - local trains with people hanging onto the doors. Like bats. As he would say.


The next station was Belgharia. The train halted there for a minute or two before lurching off again. Rajat yawned. He had been up all night watching the Champions League Final. A disappointing game, for the Manchester United Fanatic that he was, and had thus lost most of this night's sleep. He wished he was home, happily snoring in his bed. Curse internships. He muttered.

Dada, time ta koto holo? (What's the time?)
He turned around and saw a young man looking at him and pointing at his watch.

Showa Nota. (A quarter past nine) he replied. He took out his phone and whiled some time away playing some random games, till he noticed that the train was slowing down again. Realising that this was Agarpara, he got up again, and headed for the door. An old woman sat huddled, on the edge, who peered up at him when he arrived. Rajat frowned again. What's with the fascination for edges?!


A few others flocked around him, all readying to disembark. The train kept rolling, slowing down with every passing second. The impatient passengers leapt off the train and hurried away. Rajat rolled his eyes. Won't ever learn, will they?

It was a few seconds later, when the train had come to a halt, that he jumped off, and looked around. He had to reach platform number 4, and then take a rickshaw from there, he had been directed. Reaching platform 4 would mean taking the overbridge. He glanced down, along the platform and saw one some feet away.

He started walking towards it. The platform he noticed, was far less crowded than the one at Dum Dum. The hawkers and stall keepers however were the same. His eyes wandered around at the colourful advertisement bill boards. There was a new Raymond's showroom at Agarpara, and they were giving 20% discount. He read the Bengali script slowly. He had studied Bengali for twelve long years in school, and still found reading Bengali to be a challenge.

The train had started moving again. He glanced at it, as it slowly moved out of the platform. The old woman was still huddled on the edge of the door, and was looking at him queerly. For some reason he kept staring at her, till his ringing phone made him break away his eye contact.

It was his mum.


He dropped his phone into his pocket, and turned around once again to catch that old woman. She had gone forward by quite a distance. However, he could still see her, and the hair at the back of his neck tingled when he realised that she was still staring at him. There was something she wanted  to convey. He didn't know what.

In fact, he would never know what.

The next thing he knew a metal rod had sliced through his body. He fell down. His phone dropped upon the platform and split open. People around him gasped and rushed to lift him up.

It was too late.

Twenty odd kilometers away, Anindita stood outside her house, and locked the door. She looked at her husband.


Her husband nodded. You told him to collect the key from the darwan when he returns? As it is, we won't be done by then. We'll be late.


Oops. Hang on, will tell him, she called his number, and frowned. Says coverage kshetra se bahaar hai. (says that it's outside network coverage)

Network problems. Send him a message then.

This story is a work of fiction. But it is based on a true story. Check this : http://www.ndtv.com/article/cities/four-killed-in-freak-accident-at-aligarh-junction-113485

Nickspinkboots said…
This story has one of the most real morals I've come across. That you can die even while crossing the street in spite of being cautious in all walks of life.

So just fuck it and cross those railway tracks instead of taking the overbridge.
14 July 2011 at 09:52