Hey Oh, Kashmir and all that.

The Kashmir skyline looks too beautiful to be natural. So much, that it’s eerie. It’s like one of those default wallpapers you get with your operating system. The green expansive meadows; clumps of conifers scattered hither and thither; the occasional spring of icy cold water cutting its course through the greenery, and providing the only bit of dynamism to the otherwise ever-static scenery. And of course, the lofty snow capped peaks yonder.

The Kashmir skyline is exactly like that. It’s as if God spent a good couple of hours tweaking this bit of earth with Photoshop before He declared it done. And my, does it show.  One look at those snow capped peaks is much like a Mike Tyson undercut into your belly. It literally takes your breath away. 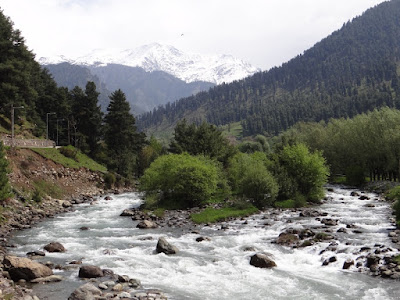 Living in a subtropical region all my life, I have had very few experiences with snow and snow capped mountains. The earliest was in Darjeeling, back in 1992, when I was but an 18 month old little organism, trying hard to keep my eyes open, and even harder to keep my nappies dry. Memories of that trip however, are virtually nonexistent because of obvious reasons. Then was Kedarnath in 1997, which I vaguely remember, solely owing to my maroon mittens that turned white every afternoon when it snowed. Then in 1999, I caught a lucky glimpse of the mighty Kanchenjunga from our hotel room in Pelling when the clouds cleared by a wonderful stroke of luck on our last day in Sikkim. That has been all the snow I had seen all my life. Given that I’ve been to virtually every Himalayan state of the country and all the little ranges that are strewn down south– seeing just this much snow is rather sad.

Till now, that is.

The snow in Kashmir is rather outlandish. We went up the Gulmarg Gondola today, which is incidentally the highest cable-car in the world. And amidst the fog, the rain and the generally freezing cold, it was the snow which took centre stage. We couldn’t go further up, to Khilanmarg, owing to bad weather and poor visibility, where they say, snow literally forms the ground on which you stand. But the amount of snow we saw till the point we went up to, was quite incredible. It’s the sort of snow that would make Himachal Pradesh wet its pants; and if Bhutan was a dog, this ias the sort of snow that would send Bhutan back to its kennel, eyes drooping, and tail between its legs.

You look around from inside your hotel room, and all you see in the distance is snow. Pure. White. Snow. The snow capped ranges; they run for miles and miles. And as you drive through the valley of Kashmir, or wind your way up one of the hills, the snow keeps getting closer to you. At times, the sun peeps out of the intermittent gap between the clouds and the snow glistens golden yellow in the bright sunlight. Bedazzling the wonderstruck writer staring up from the vale below. 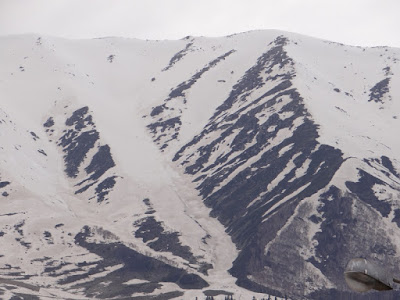 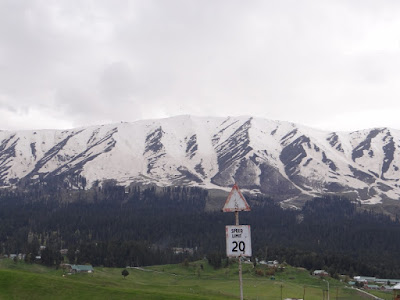 Shalu Sharma said…
Kashmir is amazing. Even the photo speaks for itself. When I look at those pictures, I can't help thinking that I must go there one day.
12 June 2012 at 09:53

kashmir tourism said…
Great article….!!!Nice to know
about new things with helping concept. I am almost brand new to blogging and
really like your post, it is really on target! Thanks for all of your time
& work. Hope you always write this blog.
kashmir tour
packages
12 November 2012 at 07:09

Men's Fragrances said…
Kashmir Tourism - Kashmir is a land of myriad seasons and it changes the hues of landscape with the seasons. Burgeoning with magnificent scenery, unique experience in Houseboat staying, Shikara riding, Mughal Gardens, floating vegetable Gardens and host of adventure activities, this enchanting valley is always lavishly beautiful and a favored destination for tourists from all walks of life. Incredible beauty of nature, innate appeal, blissful ambiance and misty cool air of Kashmir satiate inner soul of every traveler and persuade them to visit this land again and again. - Kashmir Tour Packages
18 December 2012 at 01:08

Men's Fragrances said…
Kashmir Tour Packages - Kashmir is the most wondering place in the India. this is known as heaven on earth. now it becomes a tourist spot. most tourist want to visit Kashmir and see the natural beauty of the nature.
18 January 2013 at 00:11

Men's Fragrances said…
Kashmir Tour Packages - Kashmir is the most wondering place in the India. this is known as heaven on earth. now it becomes a tourist spot. most tourist want to visit Kashmir and see the natural beauty of the nature.
23 January 2013 at 23:54