Well, okay. Not completely so, because there is this initial feel-good about having made a brand new resolution; but sooner or later, when we've gone through the first couple of weeks of the year and the sheer monotony of life sinks in yet again, we turn a blind eye to all the hopes that we had harboured and all the intentions that we had had.

Nothing sums this up better than the following piece written by the great American humourist Mark Twain, in a letter to Viriginia City Territorial Enterprise, in January 1863 :

"New Year's Day - Now is the accepted time to make your regular annual good  resolutions. Next week you can begin paving hell with them as usual. Yesterday, everybody smoked his last cigar, took his last drink, and swore his last oath. Today, we are a pious and exemplary community. Thirty days from now, we shall have cast our reformation to the winds and gone to cutting our ancient shortcomings considerably shorter than ever. We shall also reflect pleasantly upon how we did the same old thing last year about this time. However, go in, community. New Year's is a harmless annual institution, of no particular use to anybody save as a scapegoat for promiscuous drunks, and friendly calls, and humbug resolutions, and we wish you to enjoy it with a looseness suited to the greatness of the occasion."

Nevertheless, let us put all these nuances aside and let me enumerate a few things that I've been itching to write about. They are extraordinarily arbitrary and random, mind you.

First up, here's an advertisement I stumbled upon while strolling in the streets of Calcutta. This is near the Elgin Road - Lansdowne Road crossing and yes, it made me laugh, click a photo and tweet it out. 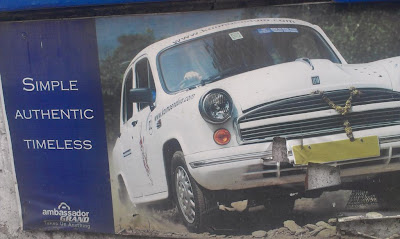 No. It is not just an advertisement for the "new" Hindustan Motors Ambassador Grand. It is also an advanced course in Print Media and Advertising. And How to Market a Pointless Piece of Garbage 101.

Look, I have immense respect for the original Ambassador. Our family had owned one for decades (1963 - 1998), and it had literally "taken on anything" as the tagline claims, while it had been with us: everyday commute, cross-country rallies, long distance drives - you name it. But the problem was that while the world moved on, the Ambassador did not. And as a result what we get now is a near perfect replica of a 60 year old vehicle, frozen back in time.

Let us now study the advertorial. Look at the craftily chosen adjectives used in the ad. It's as if the folks at HM went through every word in the Merriam Webster's and pondered over each one of them, whether it would be apt or not. "Powerful? .. nah", "Brilliant? ... um, not quite", "Fast? ... no no.", "Advanced? ... oh no, heavens. No" - finally they zeroed in on the only three adjectives that can possibly do justice to this Jurassic mass of steel and cheap plastic - "simple","authentic", and "timeless". Simple - because indeed, it is simple. I've seen blank sheets of paper more complicated than an Ambassador. Authentic - well, I must give this to them as well. Because, while you might have people modding their cars to make them look like Nissans GTRs and Porsches 911s, I'm sure you won't find people modding their vehicles to give them the Ambassador look. Therefore, a car that looks like an Amby, must necessarily be an Amby. And an authentic one at that. And lastly, timeless? Of course - the car is timeless! It has existed since the very beginning of time! It is more timeless then Grimm's fairy tales for crying out loud.

Phew. I needed that rant.

Anyway. Moving on to the next thing on my mind, which is as hackneyed as things can get: that our government sucks. Because it is, simply put, unable to do anything in particular, about anything in general. It lacks efficiency at every level, is corrupt at every step and is incompetent in every possible way. And why this sudden outrage?

Simply because, during the epic process of getting an Indian passport, I saw enough evidence to vouch for said inefficiency, the utter disregard for the general public, and a degree of arrogance that would make sea lions cower in shame. And it didn't just stop there. What made me flip even more, was that delivery of my passport, sent via the national speed post took four whole days to reach my home, from the passport office, which is scarcely five kilometers away. Compare this with the service DTDC provides, which manages to send parcels from Calcutta to Pilani - a distance of over 1600 kilometers in less than seventy two hours, and the glaring inefficiency of our government services comes to the fore.

Which brings me to the rather unfortunate incident that has been plaguing our nation for a month or so. No, I won't even bother to write about the incident, because this isn't the place to. But I wish all the best of luck, all the strength and all the justice in the world to the victim's family. Moreover, I did have a thing or two to tell the dear son of our President, Abhijeet Mukherjee, but I guess Mr Arnab Goswami has nailed that matter far better than what I could ever have. So let's chuck that for now.

Lastly, the winning-est thing I did this week was get to run some good old DOS games on my Ubuntu. It was so simple, the whole process that I really couldn't believe it. All you need to do is install dosbox from the repositories, and then run two tiny commands to mount your working directory into "DOS"-like interface and run your executables there.

I managed to download my favourite game of all time - Indianapolis 500 : The Simulation (It's an incredible 500 KB only!) and run it in the DOS environment and boy! Did I love it! I remember having spent the better part of my childhood (since the time we had a computer, back in 1994) playing this for hours at a stretch and with this download, I sank back to those good old days yet again. It felt so good! The same sounds, the vintage 3 D simulation, the pixelated graphics.

Look at the screenshot. Isn't it priceless? 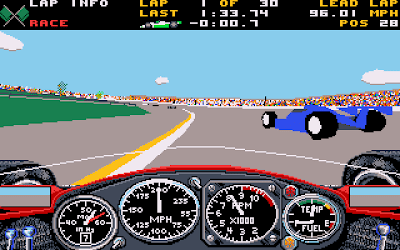 Well that's about it for this post. Happy new year everybody. Though I don't believe much in the ceremonies regarding the same, to be honest.

They really don't make any sense to me. 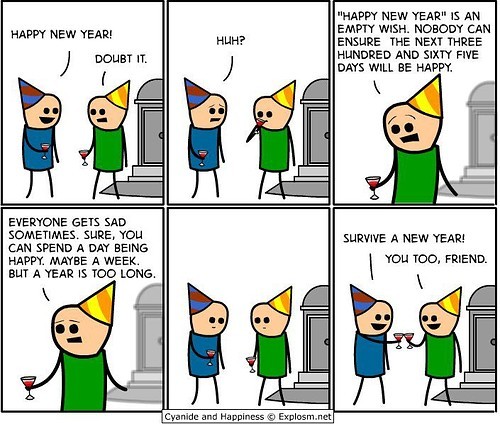 
My name is Lavanya
Sethi I had sent a courier through the DTDC Courier which contains my some
important documents, which has still not been received at the desired
destination. However the online DTDC tracking site shows in transit.


When I contacted DTDC
they informed me as follows "we regret to inform your goodself that
despite of best of our concerned offices efforts, we were unsuccessful in
tracing out your consignment and stands misplaced in transit/mention place, as
confirmed from our Cochin Branch.


I filed the complaint on
Consumer Court site also but still
not got any response.