This post was originally written for the fine folks at Top Five Records. To read the original, click here. 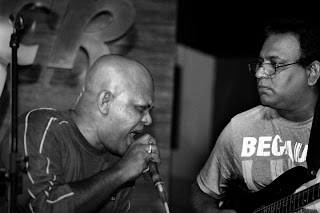 They started off in 2001 in Hyderabad - citing an all-encompassing list of influences ranging from the Beatles, through to the Police via Rush and in their decade long career, they’ve played hither and thither around the country; at times sharing the stage with biggies like Parikrama and Mrigya.

Not surprisingly, they’ve done quite a few gigs at the Hard Rock Cafe in Hyderabad, and August 29th was probably just another one in their list. For the writer however, it was his first taste of the famous HRC, and when he left the place after the gig was over, he was - to put it bluntly - far from satisfied.

The gig was dubbed “a tribute to Pink Floyd”, and there was nothing, absolutely nothing wrong with the band’s performance, or their execution of the songs. They had the energy, the talent and the required eye candy to keep every classic rock lover hooked till the end - but the main reason we remained till the end, as I realised later was that - everyone was waiting to hear and sing along to - some songs that actually come to your mind when you hear the name Pink Floyd.

Thus, what was missing was a proper setlist. I can only wonder how insane the evening would have been, had the band put their talent to cover songs like Wish you were here, Coming back to life, High Hopes, Time, Money, A Great Gig in the Sky, Brain Damage, Shine on you Crazy Diamond and an infinite other songs which actually made Pink Floyd the milestone in rock music that they were.

Instead what we were treated to, was Pink Floyd’s most exhausting and … must I say… dull - double album in their entire discography - The Wall.

They started out the evening with their cover of the opening track from The Wall (Disc 1) - In the Flesh - and what struck me at first, was their style of play. It was brilliant: the guitars, the vocals, the drums - oozing with technical proficiency. I’ve heard Dream Theater cover In the Flesh in one of their albums. so my expectations were set high. But AlterEgoz reached that bar, and maybe even bettered it? After all, DT’s Pink Floyd covers lack the inherent “soul” - mostly because they really cannot do justice to the vocals. This was, however, spot on. 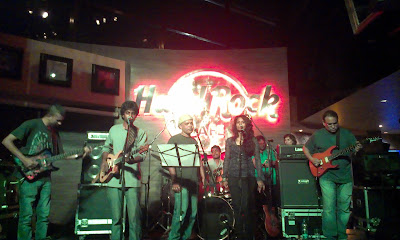 After this initial peak however, it was downhill all the way. Yes, The Wall is a brilliant album; In fact, it is one of the most critically acclaimed progressive albums of all time - but it isn’t something you do at an evening gig. Pink Floyd did do several Wall concerts in their career, but those were concerts which involved elaborate theatrics, animations and pyro effects - which is how a true progressive music concert is generally supposed to be. The moment you take the “grandeur” and associated magnificence out of a “prog” music concert, a concept album doesn’t fit the bill at all. With this limitation, and given that the crowd in a cafe at 10 PM aren’t really in a mood to understand the subtleties of such an album, they should have used their talent better to choose more relevant songs. Instead what continued was the rest of the Wall - the Thin Ice, Another Brick in the Wall, The Happiest Days of our Lives, Mother and so on. Technically and execution wise, there was nothing wrong. But it still resulted in the crowd getting more and more jittery for songs that everybody could sing to. Another Brick in the Wall Part 2 was one such rare instance that got the entire cafe singing along, and later, Hey You and Comfortably Numb (from The Wall Disc 2) elicited a lot of cheering. (Comfortably Numb, in fact was done so exquisitely well that it’d probably have made the David Gilmour shed a tear of joy, in the extreme case that he had heard this.)

To be honest, it was a good gig. If you worship Pink Floyd and bow down in front of an effigy of Roger Waters before going to bed, you’d have loved it. They even had an old guy who played the harmonica, and a young girl who played the oboe to get as close to Floyd as possible.