You can read the first part of my Ladakh trip here.

The Pangong Tso is a very unusual lake in many ways. One, it has a long and narrow shape: it is over 130 km long, with most of it (60%) lying across the Line of Actual Control and well inside Tibet. Two, it is situated at a height of nearly 14000 feet above sea level. Three, it is a saline lake - and the salinity is a direct result of salty rocks under the lake. And four, despite its salinity, it freezes completely during the winter months and is used as a motorway for faster commute.

And most importantly, it is the most beautiful water body that I've seen in my life.

The drive from Leh to the lake is again, like the drive to Nubra, pretty long - and heavily dependent on weather conditions. En route, you cross the Chang La pass, which, at 17585 feet, is the third highest motorable road in the world (Khardung La was the highest).

The landscape transitions, like during the Nubra drive in particular, and any long drive in Ladakh in general, are spectacular and memorable. Crossing the Chang La entails going through copious amounts of snow yet again, following which, the road becomes smooth and cuts across amazing rocky deserts, with snow clad peaks looming all around. The river Shyok, an Indus tributary joins you midway and gives you company for most of the latter half before meandering off its own course. Incidentally, the Shyok was the one natural outlet that the Pangong Tso had, before it was cut off by natural damming.

The first glimpse of Pangong Tso comes in striking contrast with the barren desert all around you, as a streak of aquamarine blue in the distant horizon. As you drive closer the streak becomes thicker and thicker, before you finally capture its magnitude. And your jaw hits the floor.


The blue is dazzling, and quite unlike any other shade of blue that I've seen. And the best bit is how the tinge and the hue change as the sun rolls across the sky. The blue is at its spectacular best during noon-late afternoon when the sparkling aquamarine gives way to a more dignified ultramarine. With snow-peaks on the other side, and the sun behind you, the lake looks just as if someone emptied a huge bottle of Chelpark ink in the valley. 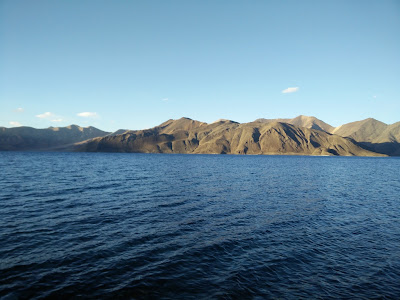 The water is freezing cold. In fact, it's a degree or two below freezing. The salinity keeps it liquid during the non-winter months. Ten minutes in the water would give you severe hypothermia. A minute of dipping my feet up to my ankles felt like an hour of cryogenic torture. Not that I know how cryogenic torture would feel actually feel like, but what I believe it could feel like.

Another interesting observation about this region is how saline water and snow-clad peaks exist side by side. I was hard pressed to think of another such place in India that has this feature. Even outside India, the only places I could think of, off the top of my mind where you could get saline water and snow would be the polar regions. Unless of course, there are other such hipster lakes elsewhere.

It is again recommended that you stay for a night at Pangong. There are a number of tent services - which offer you tents that, while not exactly being the last word in luxury (far from luxurious, in fact: hot water is obtained by heating water in a stove, for example, and the nearest electricity lines are several miles away), are situated right beside the lake. A return trip back to Leh on the same day would be way too tiring, and you would also miss the epic sun rise the next morning.

Temperatures drop precipitously after sunset. And you are required to don several layers of warm clothes before you tuck in with the graciously provided hot-water bag inside your tent. The wind howling outside all night creates an atmosphere that you won't easily forget.

We woke up at a quarter past five and mustered all the intestinal fortitude that we could, to walk out of our tent and to the lake to witness the sunrise in all its beauty.

And we weren't disappointed.

Whilst hidden behind the peaks across the lake, the sun announced its entrance by casting beams all round, and spectacularly lighting up the snow clad mountains on our side. As the tall shadows became smaller and smaller, we got the first glimpse of the sun as it perched itself on top of one of the peaks. The cold was incredible. And just as the sun exploded through the mountain range, the temperatures climbed as quickly and very soon, as hands came out of pockets and teeth stopped chattering, it was a very pleasant chill that had surrounded us.

After a quick breakfast at the generator operated "restaurant" tent, we headed back for Leh once again. En route, we stopped by another portion of the lake to catch a glimpse of a flock of brown-headed gulls, who were lazily flapping away in the frigid water and basking in the sunshine.

I hope I've managed to convince you exactly how wonderful Ladakh is. It is an earnest request, that if you are a travel bug and if you still haven't visited Ladakh, you should do yourself the service. If on the other hand, you aren't quite the travel bug, then you should visit Ladakh nonetheless.

Truly, it is the most beautiful place I've seen in my life.

All pictures clicked on a OnePlus One camera. The last one (close up of the gulls) was clicked on a Sony point-and-shoot SLR.
Email Post
Labels: India travel
Location: 36B, Panditiya Terrace, Dover Terrace, Ballygunge, Kolkata, West Bengal 700029, India