This post was originally written for Top Five Records. You can read it here.

Traditional Irish is probably not a genre of music that I am very well acquainted with. Far from it, in fact - it's a style of music that I'd honestly never heard before. But then, last weekend, I had the opportunity to go for such a concert, and given my propensity to explore newer styles and genres, I decided to make full use of it.

The Gloaming was formed in 2011 by an eclectic group of musicians who having already established themselves in their individuals careers, had decided to experiment with stretching the limits of traditional Irish music and presenting it to a wider audience. They are a five-man ensemble comprising of fiddle master Martin Hayes, guitarist Dennis Cahill, singer Iarla Ó , Lionáird, viola/hardanger innovator Caoimhin Ó Raghallaigh and New York pianist Thomas Bartlett. 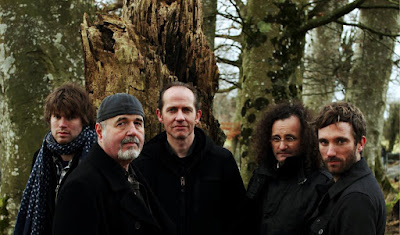 As I mentioned, I am a complete stranger to traditional Irish music, but the manner in which they  melded  Irish tunes into a rather contemporary arrangement was indeed commendable. The vocalist was a master of the classical sean-nós a-cappella song style, and his powerful, soaring vocals blended beautifully with the viola, the fiddle and the piano. Their lyrics, often haunting and emotionally charged, are drawn from old Irish literature and folklore. Hayes’ and Ó Raghallaigh’s mastery with the strings made for some delightful improvisations while Bartlett’s impassioned piano performance meant that he got so absorbed in his playing, that he managed to break the foot pedal twice in a frenzied bout of foot-stomping. The consummate ease with which he managed to repair it, during the performance was worthy of admiration as well.

The concert was definitely an ear-opener to a style of music that I had never been exposed to before.

Here’s a glimpse into their rich melodic oeuvre.