Google vs Facebook : the definitive battle for internet dominance 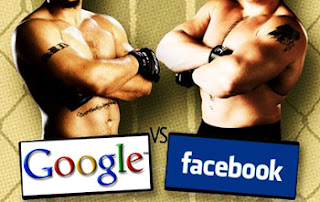 My blog is definitely not the place on the internet where you would want  to read a commentary on the biggest battle that is being fought on this planet right now. But my fascination with the internet in general and social media in particular compels me to write down my views on the same.

So, Google versus Facebook it is. At first one glance one wonders what sense it makes to pitch the biggest search engine against the most successful social networking site, but you'll see. Hold your horses.

Since 1998, Google's sole mission has been to organize all the information on this planet and make it more usable. Clearly it has succeeded in the most awesome manner. Starting off as a meek search engine being bayed by far superior rivals, its journey to the pinnacle of internet dominance has been a tale of sheer brilliance, innovation and in-your-face ethics, and till the mid-late 2000s Google enjoyed its pride of place as the numero uno on the web. But then, all happy tales have the irritating worm dangling from the end, which somehow manages to eat its way through and spoil the tale in its entirety.

Facebook started off as an ambitious project by a couple of college students to hit on their college girls. Well, I won't bore you with the details of Mark Zuckerberg's story here. But Facemash (as it was known back then) soon became Facebook, transcended the walls of Harvard University and spread like a pandemic. The be-all and end-all was that Facebook's increasing popularity gave the folks at Google more than just cold feet and broken finger nails. And things just kept getting worse. In July 2010, Facebook was reported to have 500 million users worldwide. A bit of math leads to the mind blowing stat that 500 million -- that's a twelfth of entire humanity. Of course, that was a year back, so it's a lot more today.


Let us now analyse some of the important aspects of this epic battle.

The naked truth first, which is simply put, Google sucks at social networking.
Or at least, has thoroughly sucked till date. Google championed the web. But its attempt at social networking never took off in the right direction. The glimmer of hope that was Orkut remained confined, largely to India and Brazil. The much-hyped Google Wave, despite its shizz with HTML 5, remained an obscurity and died an equally obscure death. Google Buzz lumbers on, but has been plagued by privacy issues since its birth and ... let's face it, it's basically a place where Google employees bite each other and grumble about Facebook.

Google's diversification meant that it had multiple arenas to fight multiple rivals. All well established, at that. There is Mozilla and Microsoft gnawing at the Chrome browser. There is Microsoft again, trying to outwit the Chrome OS with it's cloud based Azure. Lastly and more importantly, there is Apple's ubiquitous iOS locked in a death-match with Android.

The aforementioned however are not as much as Facebook's brilliance as they are Google's failings. As for the former, there are a couple.

Facebook's tiny red notification button, for one, was an important feature never seen on any social networking website before. Insignificant as it might seem, that was one factor that set Facebook apart. The user logging in, would naturally be lured by the red blotch on the top, and soon, he would be swimming around in a sea of notifications. It acted like a vortex, sucking the user into Facebook, redefining social networking. Orkut seemed staid after this.

Facebook's 'like' button, however, was the first definitive nail on Google's coffin. Maybe it's a bit too harsh to use that metaphor now, but it essentially was that clarion bell that sounded one fine morning that resulted in hundreds of Googlers all over the world scurrying to work overtime. The like button was an extraordinarily unassuming yet shrewd business move. Within weeks of its introduction every page in the internet, every blog, every brand, and every product of every brand had it's own 'like' page. Virtually every link on the web could now be 'like'd, and the internet thus transformed into a web of 'like's knit together by Facebook, and a certain Mr Zuckerberg leering from atop.

enter Facebook's next big venture, Facebook Mail, and to be frank, it did not turn the world upside down and was light years away from being the GMail killer that Zuckerberg had envisaged. It was a neat feature agreed, that incorporated messages and chat history in simple easy-to-look-up conversations, but it hardly does anything to rival Google's superbly successful GMail.

and enter Google's +1. Remember the Googlers scurrying to work overtime to combat Facebook's cunning 'like' button? After a lot of brainstorming they come up with something exactly similar to a 'like' button but with a supremely lame name. And presto, the +1 button is born. It is easy to see why they couldn't keep the name 'like' -- Zuckerberg would have personally disemboweled Larry Page over copyright infringement in that case. And verbs similar to 'like' are hard to come by, thanks to linguistic limitations. So +1 it was, and +1 it still is. It works exactly like a 'like' button, as you can see in this blog. You like a link, and instead of 'like'ing it on Facebook you '+1'it. Lame ass? Very.


The Question of Originality. But will it help? As it stands of now, the +1 button has exactly the same functionality as a 'like' button. Also, how many people will actually navigate to your Google profile to see what all you have '+1'd ? Quite unlike the teeming millions of Facebook admirers who will pounce upon any link that you have 'like'd that appears in their news feed?

All of the awesome innovation that Google is synonymous with seems to have hit the rocks here, and in a depressingly sad manner, if you ask me.

The important thing in the internet is, unless it is ground breaking, it never really catches on. GMail is a fine example. In spite of having some remarkable features that sets it apart from Windows Live or Yahoo! the fact that it came late in the email business is sorely responsible for its astonishingly low number of users as opposed to Windows Live or Yahoo!.

And so it is, with the '+1' button. I really don't think that Google's brainchild can match wits with Facebook's 'like' gambit here.

The final question remains. Is Google scared?
There is absolutely no doubt that Facebook's advances have shaken Google. Last November, Google announced that it would block automatic import of contacts from Google into Facebook. Coming from Google, a firm that stands for an open web and a motto that states " do no evil" this is surprising. Which goes on to prove that Google is getting cold feet, albeit, a wee bit. But does it matter to them anymore?


... finally enter, the awesome Google Inc.
And that is where Google's awesomeness kicks in. The dominance of the web, which was Google's primary ambition (and is the subject matter of this post) has indeed been threatened by Facebook. But it is imperative to understand, that in the age of the IT, when priorities change within years, web-dominance today is not just about having control over the websites that you visit and bringing the whole internet under one superpower. That might have been the case five years back, but now, with the advent of cloud computing, 4G and web TVs et al, web dominance is a hell lot more than knitting a web of 'like's between websites. And in this new scenario, social networking websites are, but a very trivial component.

Not surprisingly, Facebook has no identity here. Google on the other hand, has an arsenal of weapons to deploy and make the most of these changing demands, and yes, they are the Android, the Chrome OS and the Google TV.

For in the new web, its a different world out there. One that bodes exceedingly well for Google.

Because, as it always has been; Google = Awesome. And so shall it remain.

Anonymous said…
The primary reason for Facebook's success in Soc. Net. and Google's failure in the same, is the fact that all the girls are on Facebook. Get them into a Google Soc. Net. site somehow, and see the change.
6 June 2011 at 13:08