Sports in general, Formula 1 in particular

This post begins with some rather opinionated comments about sports in general. Given that my sporting tastes were nipped in the bud by my own lethargy and disinterest, and that I mostly yawn while watching stuff like the Twenty Best Goals That Shook the World, you shouldn't let my opinions bother you one single bit. Because if you do, there'll be one of those famous word-battles in the comment form following this post, that have plagued quite a few of my blog posts till date.

Notwithstanding, I stick to being the opinionated douche that I am, and proceed.

Opinion #1. Every sport is unique.

However, as with most hastily stated assertions, there's a but to it. Which brings us to opinion #2

Every sport is unique, but down somewhere, they're all the same.

Yes, I love creating such situations where my reader is forced into being an indignant little pigeon that frets about in disagreement making that weird low frequency noise that pigeons make. Much like an ill-tuned bass guitar.

But yes, let us not digress.

Coming back to what I started out with, viz sports. Most sports inherently have one thing in common. They all have people running about on a field, and all of them making a huge fuss about a particular ball. I know, my reader-pigeons have transformed into guffawing gorillas now, and are probably laughing at how baseless my argument seems.

Such is the thing with sports. OK, I do enjoy following cricket, and I don't mind watching a heated football match. In fact, I actually enjoy seeing ManU and Arsenal fans baying for each other's blood.

But then, there is an inherent something to these sports that make them so ordinary. So mortal. After all, it's just men running around. I agree, Tendulkar did drive that through the cover exquisitely well, and yes, that goal was quite jaw dropping. Yet, these things, they lack something that appeals to my heart.

Which is where motorsports come in.

Which form of cheering in the crowd, which vuvuzela on this earth, can replace the sound of twenty super charged V8s revving? Which goal, or which home run, or which wicket, can set your adrenaline gushing like the sight of two F-1 cars locked in a frenzy of tyre-to-tyre overtaking? 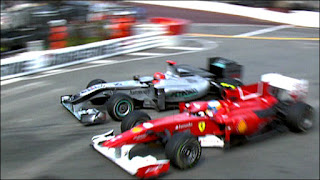 Yes, ladies and gents, this is formula 1 we are talking about. And YES, it's finally here in our country, for the very first time ever, with all of its mind-blowing and eye popping awesomeness.

What is it that sets Formula 1 aside from other sports? What places F-1 in the pinnacle of sporting exclusivity that the other mortal sports cannot match? Let's see. For one, we have the sheer glamour. It's the sheer amount of money that is spent in this sport. Formula 1 can look at every other sport in the eye and say, "I'm richer, bitch".

The second, and the more significant reason is probably the role the sport plays in science and engineering technology. Each of those twenty cars that race around the tracks are mechanical wonders. Each of them have had a few hundreds of scientists and engineers working on them. They're machines that live on the bleeding edge of tech. Spending hours and hours in wind tunnels. Having been subjected to every possible test that they could have gone through.

The people. The engineers. They're some of the finest minds in the business. They know their science and they know their math. They know how to make machines that can safely reach 300 kilometers an hour. They know how to put a wheel onto a car and ensure that it can survive such speeds and temperatures, and at the same time, they can be removed in less than two seconds. The drivers. They are human beings who do a lot more than running around and kicking balls. They have nerves of steel, and have a pulse rate that is a fraction of an average human being. They know how to keep their calm when they see a wall approaching in front of them at over 200 kilometers per hour, and find that their brakes aren't working.

This is what makes F-1 so very different. The money. The machines. The people.

Yet, that is again, not what F-1 essentially is. The glamor and the tech isn't really what's sporty about F-1. They are essential constituents, but not everything. For, under it's layer of glam, money and bleeding-edge-technology, F-1 has stories of exaltations and heart breaks. Just like any other sport. There are tales of history being rewritten and records being broken. For which fan does not remember the legend that was Ayrton Senna? Which fan does not cherish the memory of the epic last lap battle for victory between Gilles Villeniuve and René Arnoux in France '79?

These are not mere tales of sporting phenomena. These are stories of valour and passion. Of timeless people and their exploits.

For Formula 1 is so much more than a sport. It is to sports, what a McDonald's Happy Meal is to mess food. It is simply the holy grail of excitement, for those so inclined.

Why did I write all of this?

Simply because I'm going for the first every Indian Grand Prix, and that I'll be leaving in a couple of hours. #hellyeah #inserts slash-m-slash's wantonly. 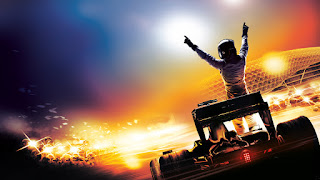 I shudder to think of the dreary month that lies ahead of me, push the thought out of mind and turn on some loud heavy metal.

Till then folks! Cya soon.

PS : here's a simulation flying lap around the Budh International Circuit, with Sebastien Vettel. It all looks very rosy and promising. Let's hope it all goes off smoothly. :)

Squitdoogenz said…
Awesome piece of writing! Couldn't agree more.
And as a matter of fact, I happen to be less than a month away from attending my first ever motor race in person, and it happens to be the Australian Grand Prix! Have been following F1 relgiously for years now and my excitement level is off the scale!
27 February 2012 at 00:08