This post was originally written for an internship program for Youth Ki Awaaz, India's leading youth platform. You can read the original post here.


The President of India is a mere figurehead within the structure of the Indian state and has no role to play in the economic, social, and cultural policies of India. In general, he or she acts as a mere postman and transmits the decisions taken by the government and gives it the aura of a sovereign decision. Except under one unique and special circumstance, when the Government of India ceases to exist. 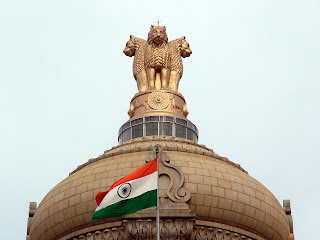 When does this happen? It happens when a general election to the Lok Sabha results in a fractured verdict that leaves the country with no obvious party in power or a Prime Minister, and so no Government. This is when the Indian state regresses back to what someone would say “a barbaric and ungovernable state”. Without a clear mandate, each political party tries to use all resources, legal or otherwise to cobble together a semblance of temporary majority, through which it tries to establish its legitimacy to rule the country. This is the only time when the President, freed from the shackles of abject obedience to the government of the country can reassert his independent line of thought and sense of propriety to move forward the process of forming a government that acquires the legitimacy to rule the country.

The current election to the post of the President is important because the general elections scheduled to be held in 2014 are widely expected to result in such a scenario where no party will win a majority. The benevolence of the President (whoever he may be in 2014) will therefore be essential for the party to come to  power. There will of course, be a lot of the traditional unscrupulous horse-trading, which will be used to lure legislators and create a majority. But the President’s say in this matter will be of utmost importance.

The election to the President while being irrelevant in the immediate future is important for a second reason. By looking at the way political parties line up behind or against each other we get a sneak preview into the political landscape that may emerge after the elections in 2014.

Since political parties are rarely ruled by the principles of good governance or ownership, the opportunistic alliances that they are striking today is a harbinger of the posture and alliances that they might strike two years hence. So the political pundits are observing their behaviour in the backdrop of the Presidential elections to second guess their behaviour in the future.

On the face of it, this is a straight fight between Mr Pranab Mukherjee, the official candidate of the UPA and Mr Purno Sangma, who is being supported by sections of the NDA. The numbers on the ground suggest that Mr Mukherjee will be winning with a handsome margin, but there are wheels within wheels within wheels in the politics of the Great Indian State. So let us speculate what these wheels could be.

Mr Pranab Mukherjee has been a long time troubleshooter for the Congress and the UPA. But unfortunately, he does not have the confidence of Mrs Sonia Gandhi. This is because, after the assassination of Mrs Indira Gandhi. he had the temerity to offer himself as a candidate for the post of Prime Minister, ahead of Mr Rajiv Gandhi. And because of this indiscretion, some people suspect that the Gandhi family does not completely favour him in any position of power. This year, Mrs Sonia Gandhi had the option of nominating either Mr Hameed Ansari or Mr Pranab Mukherjee for the post of the President. And Mr Ansari, being of the minority community, and a loyalist was the preferred choice. However, a lot of political handshakes later, the UPA went on to name Mr Mukherjee as their official Presidential candidate. But the Trinamool Congress, the ruling party of West Bengal and a loosely coupled part of the UPA had set a new pitfall. TMC leader, Mrs Mamata Banerjee openly disregarded the UPA’s choice and nominated ex President Dr A P J Abdul Kalam as her preference. Sparks flew within the UPA, and Mrs Banerjee even went out of her way to rope in Mr Mulayam Singh Yadav to her side. But politics, as they say, is never an easy game to play, and in spite of a lot of attempts to change popular opinion (to the extent of creating a page for herself on Facebook) she failed, and the UPA stood its ground. Mr Pranab Mukherjee thus remained the official UPA candidate for the President of the country.

It is most likely that he will win, but we do know that Mrs Indira Gandhi had staged a coup and had got Mr V V Giri elected against the official Congress nominee, Mr Sanjeev Reddy - so there has been an upset in the past. in 2012 it seems unlikely, but then one never knows what lies in the womb of futurity.

While Mr Pranab Mukherjee’s win is almost certain there is one tiny incident that can queer his pitch. Mr Mukherjee held an office of profit at the Indian Statistical Institute in Calcutta. And he should have resigned before filing his nomination for the post of the President. He claims he has done so, but his opponent, Mr Sangma has challenged this claim, by stating that his resignation was submitted after he submitted his nomination and / or his resignation was signed by someone else on his behalf. If these allegations are proven true, then Mr Pranab Mukherjee’s nomination and subsequent election may be cancelled and Mr Sangma may end up as the President in 2014 even though he does not get a majority of votes from the electoral college in 2012.