… because let’s face it. India would be a better country without these.

If you have stayed in an Indian metropolis, and been one of the teeming millions of citizens who commute to work daily, and if you had possessed an ounce of common sense while at it, you would have realised that the root of all traffic problems in India is a blithering yellow and black contraption, otherwise known as an autorickshaw.

The mere sight of one of these medieval torture devices is enough to get my blood to boil. But what riles me me the most about them, is how their drivers wreak havoc in the country in the name of public convenience, while being under the false assumption that public roads are their’s and unquestionably their’s for the taking.

Therefore, they break every single traffic rule in the country, destroy the environment with black smoke and noise, kill everything from puppies to little babies and if you, even for once, attempt to reprimand them for their crimes against humanity, they threaten to drive over your shoes and feed your now severed toes to the roaches in their attics.

Now that I'm in Hyderabad, I too, have become party to this madness. Every day, I get aboard one of these rattly little tea-kettles, hold on for dear life while the driver puts on the world's worst songs on the world's worst music system, at the world's highest volume, and then proceeds to systematically decimate all the goodness in and around the neighbourhood.

So, during the long hours that I spend contemplating about everything in the world, I've been ruminating about ways to get rid of this threat, and I think I've struck upon an idea that is sheer genius.

Before that, let's face the harsh reality: that auto-rickshaws cannot be banned. Why? Because, auto-drivers, the only community of Indian citizens who benefit out of this business, happen to form a sizable chunk of the general populace – which only means one thing to the people who make rules in our country – viz. vote banks. So if one rare and clairvoyant Member of the Parliament were to make as much of a suggestion in this regard, every other person in house would glare at him, instantly turning him to ashes. If he did turn to ashes, well and good. If he decided to argue back, the country would have had it: a third MP would raise his voice, followed by a fourth, and then a fifth ... finally, everything would blow out of proportion, the Lok Sabha would be adjourned, the government would declare a national emergency – and we, the ordinary citizens would have to form long queues outside rationed kerosene stores the next morning. 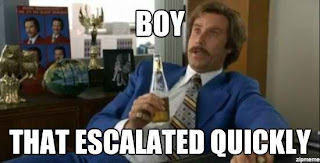 Yes, India is a funny country.

So, let's get to the next-best solution – because banning auto-rickshaws, is simply infeasible.

The next best idea that I could think of, doesn't require the government to do a thing, so it's instantly more efficient than the other one. This idea, stems from a certain observation that I've made regarding auto-rickshaws – and that is their incredible maneuverability. They have a turning radius of ... what, 2 meters? Which means, that they will steer left, then right, then turn around and go against the traffic, just because they bloody can. Because their confounded machines can do all that in the limited space that Indian roads provide. They don't stop at traffic lights as other motorists do; they dodge around exasperated drivers, travel perpendicular to the flow of traffic ... like pedestrians at a zebra crossing, duck under rear view mirrors of nearby cars, and finally find the tightest empty space between two buses, and go right in, and halt. That too, not because the light is red, but because going another inch forward would crush their beloved vehicles beyond recognition. Which happens, yes, but then in India, people don't learn, do they?

So my proposal to get rid of this nuisance, is to the companies who make auto-rickshaws – and the only name that comes to mind is Bajaj Auto.

Yes, Bajaj have done a lot to ensure that the stuff that come out of their auto-making plants is ecologically friendlier than what they used to be a decade back (I refer to the shift to CNG/LPG) but it's high time they realised that in spite of technological advancements, their products continue to be weapons of mass destruction – and are the number one cause of depression, inner turmoil and severed toes around the country.

My suggestion is thus, a simple engineering feature – reduce the auto's maneuverability. Make them heavy. Make them less powerful – yes, even less powerful than the single digit BHP output they have today. Restrain the movement of the handle bars, so that auto-drivers learn to corner like other motorists, and not make a stationary right turn to fill the only remaining gap in the road. This plan, unlike the previous one is certainly more efficient because the government has absolutely nothing to do about it. Moreover, it's very easy to implement – even the worst mechanical engineers can attach a simple elastic rubber band to the handlebar to keep it from being turned too much. And if adding a lot of weight is a difficult thing, just glue a bunch of bricks to the back of the machine. And presto! You have the new avatar of the the infamous autorickshaw – heavier, slower, and far less maneuverable than its predecessor.

And yes, it'll save more lives too. 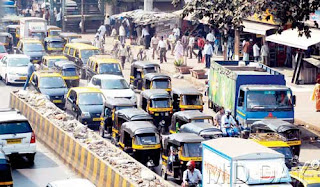 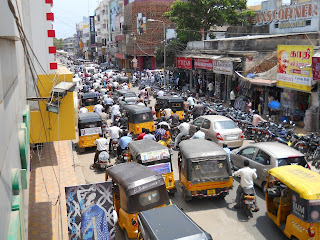 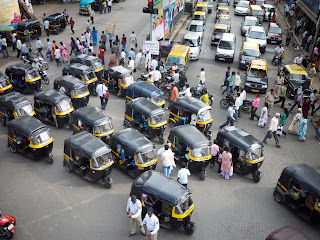