"Driving around in circles looking for normality" : Ron Howard's Rush - A film review 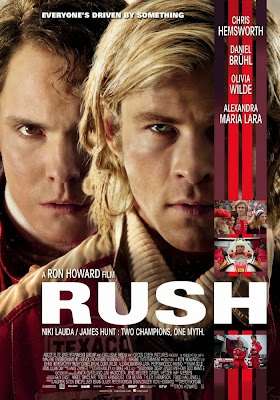 I don't remember awaiting a movie more eagerly than I did for Rush.

When Ron Howard made an appearance as the special guest in an episode in the 20th series of Top Gear and gave us titillating insights into his upcoming movie, my tongue was just short of hanging out, my bottom just short of falling off the bed, and my eyes, just short of literally popping out, like they do in comic books. But then, I told myself, calm down, boy. This ain't gonna release in India. Might as well wait till you get the DVD Rip – which would be several months later.

I did not know till less than a week before its release that it was actually releasing in India. And when I did, it seemed as if the whole universe had somehow arranged itself to be in complete and absolute compliance with my tastes. (Add to that the fact, that Dream Theater is releasing a new album tomorrow, and if you know me, you will understand the reason behind my Utopian premise.)

But I digress. Let's get back to the movie.

For those who aren't aware, Rush is the story of one of the most celebrated rivalries in the history of Formula 1. Sure, the first rivalry that pops to your mind when you talk Formula 1 is that between Ayrton Senna, and Alain Prost – but the story of Senna, in all honesty, and with all due respect to the man, has been documented a million times – and spinning yet another yarn around him would have been a tad too clichéd. Which is why, Howard chose the other great, albeit shorter rivalry that had unfolded a couple of decades back as his subject – the one between two drivers who couldn't possibly have been more opposite in nature, yet hell bent on a single intent – which was, simply put, driving to win. 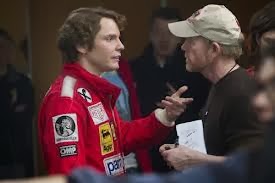 First, Niki Lauda. This Austrian-German came from a business family background which was thoroughly opposed to his interests in motor racing. However, like the stereotypical wayward son, he broke all ties with his parents and used his family's wealth to get himself sponsors to fund his motor racing campaign. He first caught people's attention in the lower leagues of Formula racing – and steadily went up the rungs of motorsport society to land himself a lucrative contract with the world-famous Ferrari Formula 1 team. Niki was an impeccable driver, and had a brilliant technical mind. He spent hours setting up his car before a race, till he was convinced that it couldn't be bettered. Long hours spent in the garage with his mechanics – choosing the right weight distribution, the right gear ratios and so on. This made him very unpopular in the F1 community – but that didn't deter him in his pursuit for technical perfection.

Second, James Hunt. This alcohol-gargling British playboy was the stark opposite of Lauda. He was popular with women, and had a penchant for partying late into the night. He didn't give a toss about the car he was driving, and cared even less about the technicalities that fascinated Lauda so much. As long as he had the women, the alcohol and the paparazzi around him, Hunt was at peace.

Though he shared the same undying will to win as Lauda did, he was still very different in his execution. On track, Lauda was a calculative driver. He used his mind to do to overtakes, and knew when to hold back. He loathed uncontrolled aggression and believed that throwing caution to the wind wasn't the way to win races. 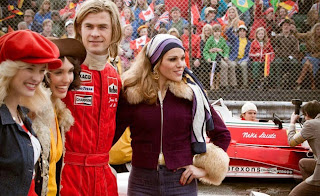 Hunt on the other hand, was fueled solely by passion. He didn't overtake with his mind. He overtook because he wanted to, and because he felt he could. He was perennially willing to put his life on the line to squeeze that extra second off his rivals' time and do that belligerent overtake that would have made Lauda shake his head in disgust.

Characterisation wise, therefore, this story had stellar requirements. It needed two actors who would not only understand the differences in characters they had to portray, but who would actually do justice to the way they portrayed it. This wasn't a sports movie which was meant to glorify a sport. It had far more humane intentions. Released in an age of technological wizardry, when Formula 1 has often been frowned upon as an engineer's sport, this movie tried to prove the opposite. That it is the drivers, and solely the drivers who form the cornerstone of Formula 1.

And did it deliver?

Oh bloody well, it did. I can honestly not think of a more apt casting than Chris Hemsworth and Daniel Bruhl as these two racing legends. In a pre-release screening of the film at New York, Bruhl and Hemsworth explained the differences in their methods of research while they were preparing for their roles. Bruhl had a clear advantage because he could actually talk to the real Niki Lauda – to whom he posed several sensitive questions, while Hemsworth had to rely on extensive video footages of Hunt's interviews to get to know his counterpart thoroughly. In the end, their execution left one asking for nothing more. It was spot on.

Howard has had several black belt releases in his career. From acting to directing to producing, he's done it all. Look around, and you can associate big box office and TV flicks to his name – A Beautiful Mind, Apollo 13, Cowboys and Aliens and of course, Arrested Development.

With such a star-studded track record, my expectations were obviously sky-high. And was I disappointed?

With Rush, Howard has done so much more than just make a sports film. He has treaded on a fine line to deliver something that is neither blown out of proportion, nor dull and bland. Formula 1 is an easy subject to glamourise in a movie. It naturally provides all the tools a director needs to raise the glam quotient – fast cars, spectacular crashes, thrilling action and hot women. But Howard kept it well under his control. He could have easily made something like Fast and Furious out of this story – with Hunt doing a handbrake-turn around the tight corners of Monaco and Niki's Ferrari doing a double somersault at the Nürburgring. Fortunately he didn't. He showed just the amount of sex that the characterisation required, the right amount of suspense to keep watchers hooked on till the end, and more importantly, just the amount of glamour that was historically accurate.

But that doesn't mean that what Howard gave us was just another glorified sporting documentary. 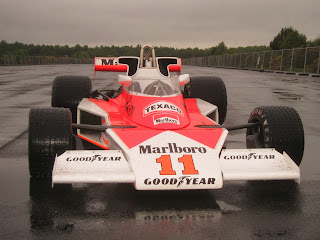 In fact. Howard was as dogged in his pursuit of historical accuracy, as he was relentless in his aim to make the movie appeal to all and sundry. I went with four others to watch the movie, three of whom weren't into Formula 1. It was just me, and another chap who were. But, from what I gathered after the movie ended, everyone loved it. This appeal, that Howard has so marvelously managed to incorporate, is partially owing to the story itself which he chose to work on, and partially in his direction which has scarcely been better. Cinematography was over the top. Camera work from inside the drivers' visors, from the wheel nuts of the cars, and from inside the exhaust pipes and pistons was top of the world stuff. That is how you add the thrill factor to a movie that seeks historical accuracy. You do not change the truth to feed the public hunger for thrill – you innovate with the camera to do that. And boy! Ron Howard did that, and how! Thus, even if you are not a fan of Formula 1, I can vouch that you won't get bored by this movie. In fact, there's a good possibility that the movie will pique your interest in motorsport – and might just convert you into a fan.

And in the rare case that you are a fan already, this movie could very well be the greatest movie you'll ever see. If you know your history well you'll actually appreciate how sweet Howard's rendition is to what actually happened in the 1970s. If you, for example, know that the only six wheeled car to race in Formula 1 was the Tyrrell P34 – in 1976, you'll share a smile with none but yourself when you see the same car in the movie. If you, for yet another example, know your tracks and circuits well, you will only be elated to see the real places that Howard has shown – from Watkins Glen near New York to Interlagos in Brazil, from the “temple of speed” that is Monza to the “green hell” that is the Nürburgring, from Brands-Hatch in Britain to Paul Richard in France. And the epic finale at the Fuji Speedway in Japan.

Iconic locations. Memorable scenes. Timeless people. Rush had it all. It was the sheer distillation of all that Formula 1 stands for, and arguably, the monumental epitome of Ron Howard's career in film direction. It left me in a state of numbness – exhilarating and emotional in equal measure. I could cry, but then again I couldn't. It was epic, epic stuff, and it invoked feelings that no other movie has ever invoked in me before. I can only thank Ron Howard for that. 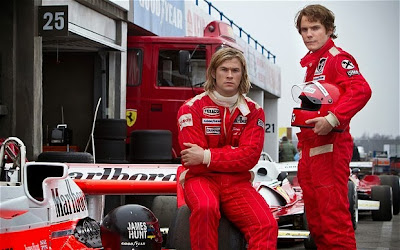 Indira Mukerjee said…
Good my son ! this is a must see movie for an auto enthusiast like YOU ! Great to see that you had watched it !
24 September 2013 at 08:51