I wrote this article for Top Five Records. Read the original here.

The independent music culture in Calcutta has seen a long and meandering history. A history that begins back in the 1960s – a time when The Statesman still held the respect and the readership of the Bengalis, when the Communists were yet to form their first government in the state, and yes, when Park Street was still hip.

It has since then, gone into a period of decline, remained underground for a little over three decades, before resurfacing again, just before the turn of the new millenium. Cynics have always been ready to point out that this resurgence of alternative music in Calcutta has sorely lacked the class and exclusivity that had been the essence of the audacious, non-conformist acts from the sixties and seventies. But, the fact remains that Calcutta is, and will continue to be, a stronghold of India’s vibrant indie music scene. Therefore, it isn’t a surprise that the biggest celebration of indie-music in the country, has Calcutta on its map, every year.

We’re huge fans of this festival – you’d probably know that, if you have read this blog before – and we weren’t going to miss out on this year’s edition either. And when tickets for Calcutta went on sale earlier this year, we were probably one of the earliest to get our hands on them. The months that passed till the event kicked off on the 1st of November was pretty arduous, and it was made worse by the teasers that the Nh7 Facebook page kept exciting us with.

And then suddenly, it was there.

The first thing that struck me when I reached the venue, like it had, the last time in Bangalore as well, were the absolutely stunning aesthetics. The venue had been set up beautifully – the colours, the graphics, the stages – top notch stuff. There were colourful banners, cheerful graffiti and other brilliant pieces of art strewn all over the grounds. There were weird and whacky constructions, which piqued my interest for a while, but then remained largely forgotten when the main agenda of the evening, finally took off. 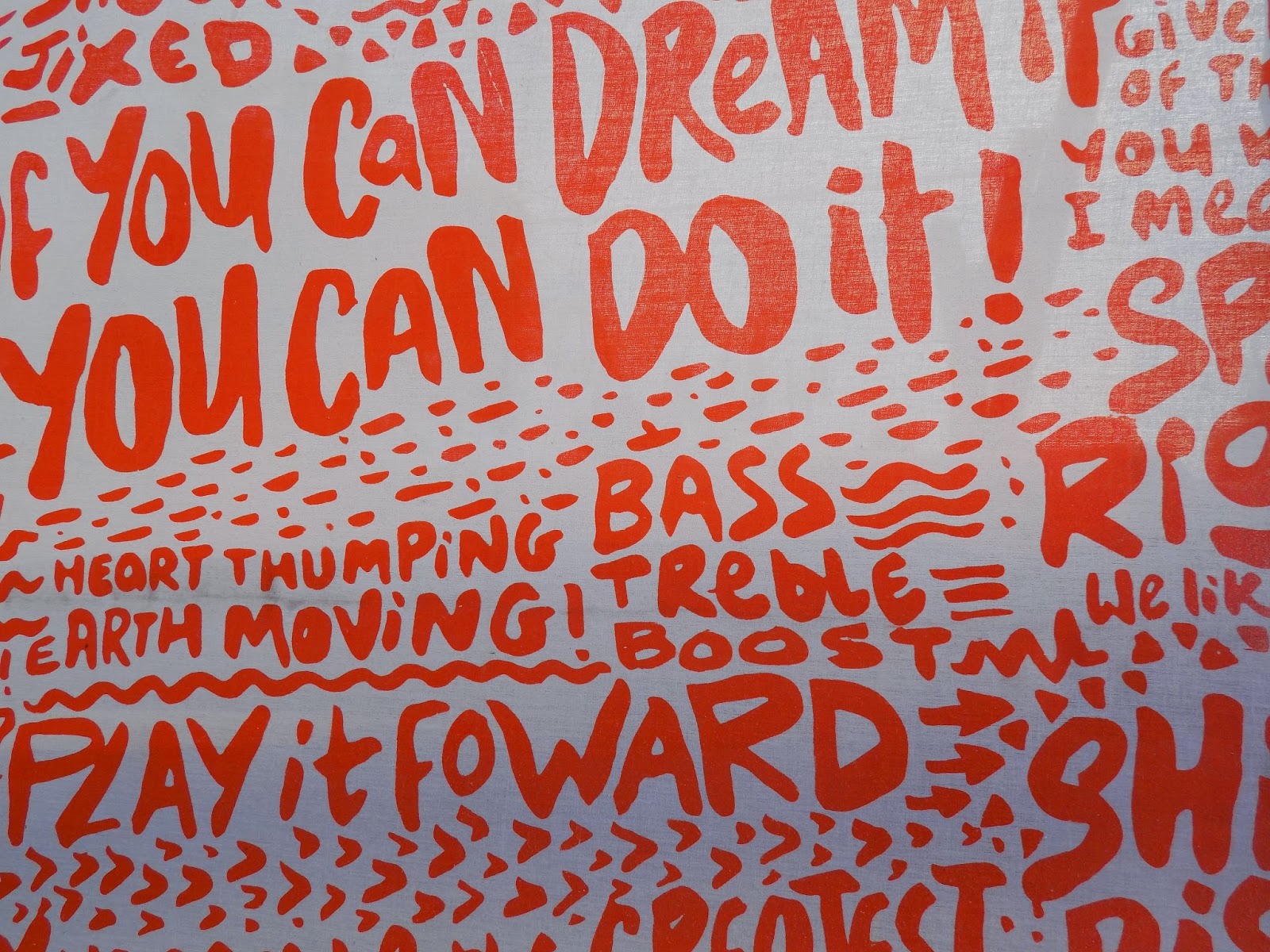 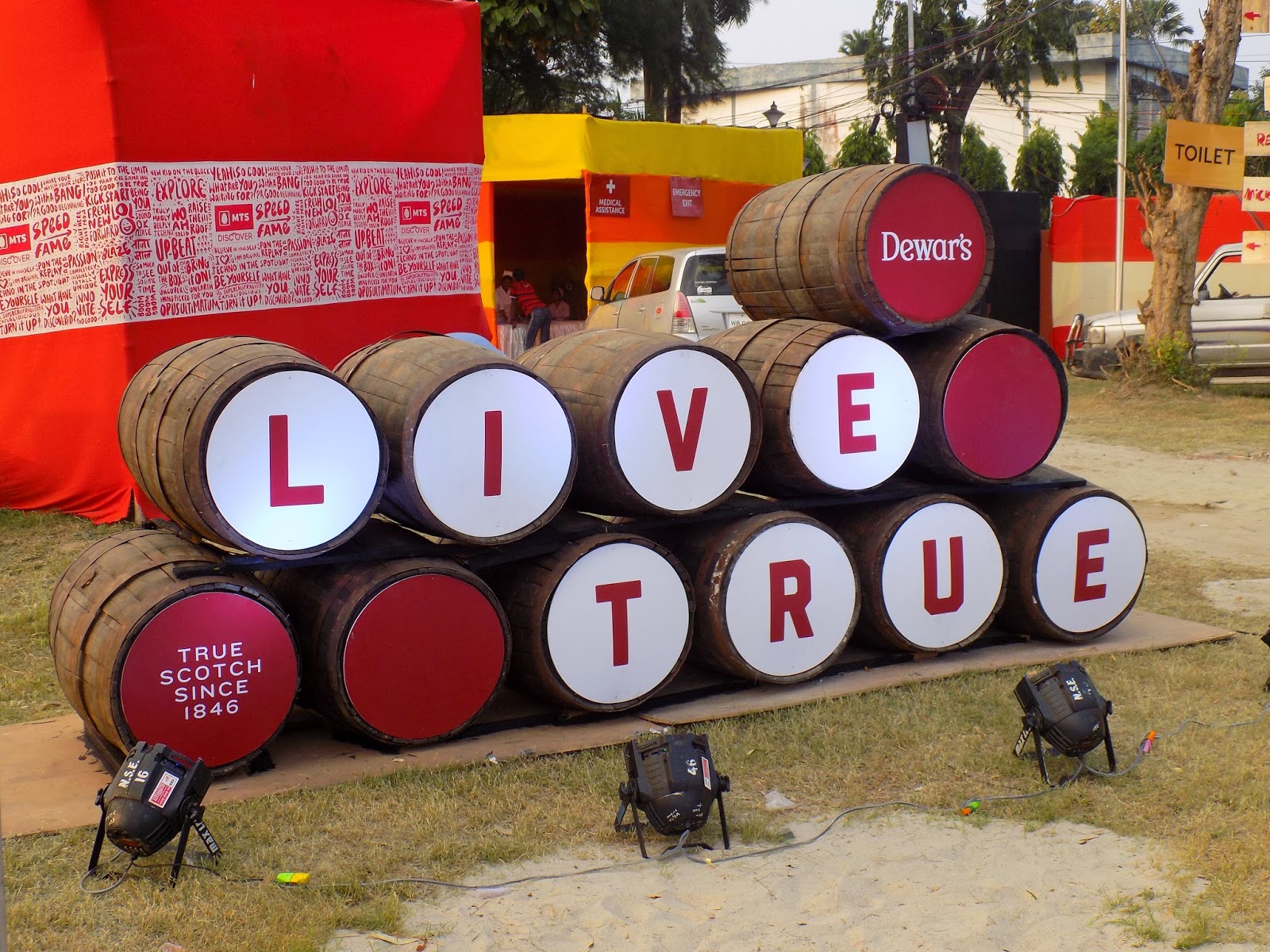 The music. Oh my God, the music.

If you’re aware how the Nh7 Weekender works, you’d know that it has multiple arenas, where bands and solo artists perform simultaneously. Thus, it is impossible to attend every single act and watch it through till the end, unless you’re a ninja who can bend spacetime of his own volition. The idea is therefore to optimise your time at each of the arenas and chalk out a roadmap, well in advance, in order to fully enjoy the experience.

Saturday thus began with the electronic/funk duo, Madboy/Mink, atop the uber-cool Red Bull Tour Bus. As a starter, their nu disco music, which came with some pretty groovy synthesizer samples and neat guitar-work, provided the right ambience to get into the mood for the “happiest music festival”. Brownie points for Imaad Shah’s hairdo, and Saba Azad’s cuteness factor.

Madboy/Mink had scarcely been performing for half an hour, when my Weekender antennae reminded me that Blackstratblues were about to kick off on the Dewarists’ stage, and this was one act that I had no intention of missing.

I had never seen them live before, but I had had the fortune of seeing their frontman/lead guitarist, Warren Mendonsa at my previous Weekender. I was therefore, well aware of the galactic levels of skill that this one man packed behind his six strings. And I wasn’t disappointed. They began their set with their hugely popular instrumental from their 2007 album, Knights in Shining Armour – Anuva’s Sky, and then proceeded to blow a few hundred minds around the arena with their eclectic collection of blues melodies. 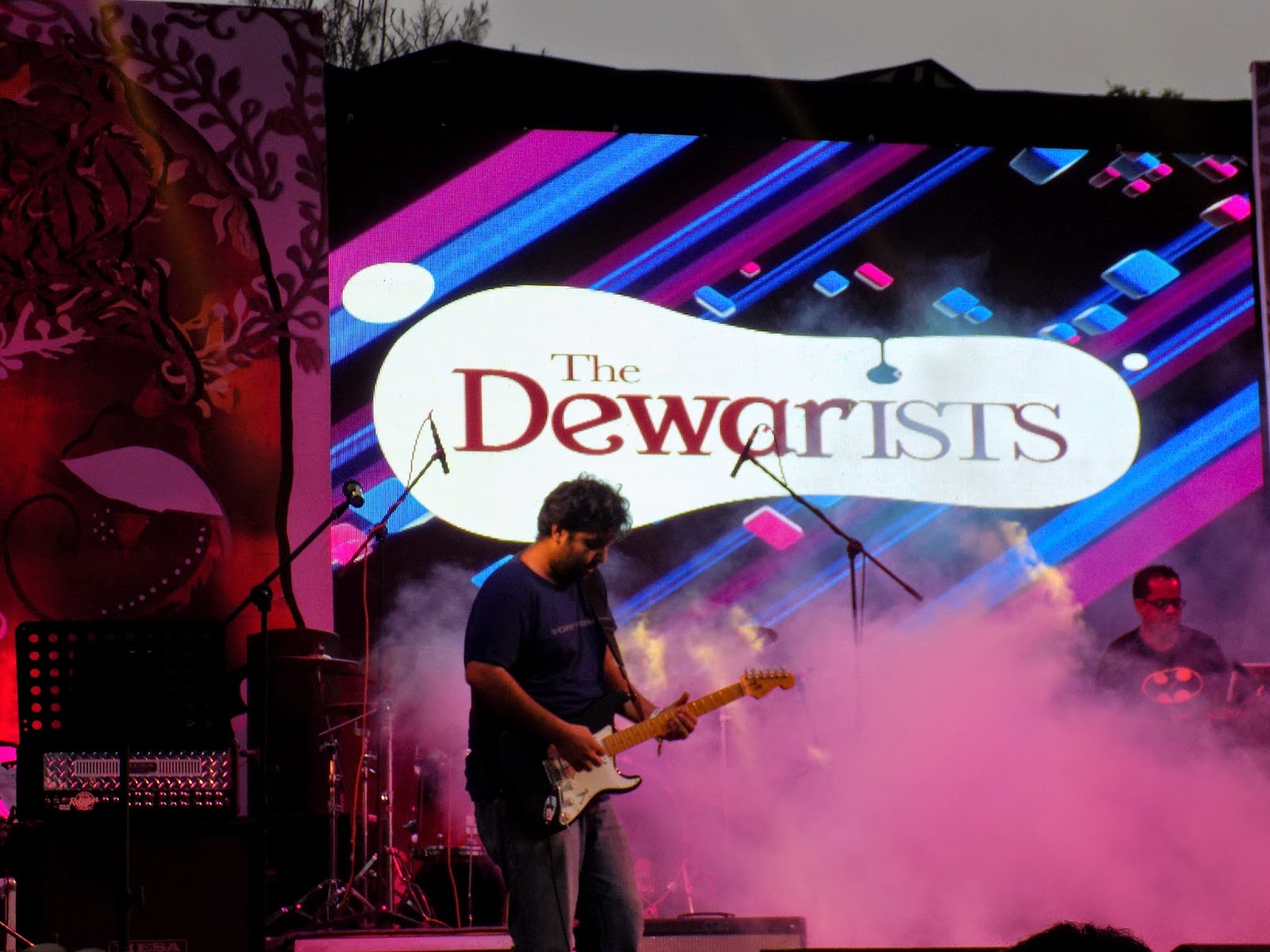 Forty five soul-stirring minutes later, we turned towards the MTS Discover stage where Ankur & The Ghalat Family were setting up for a Hindi gig, and without a second thought, I rushed off to the Tour Bus to meet my old friends, The F16s. The F16s is one band that I am quite familiar with, and while they did lack on the crowd-connection front, they made up for it, by setting a large number of heads shaking, and approximately twice the number of feet tapping with much rapidity. Amongst the songs that they played, was the wonderful “My Shallow Lover”, and the trippy “Avalanche”.

After seeing them play out atop the bus, we headed back to the Dewarists’ stage, where Soulmate, the three piece blues rock act from Shillong were going through their routine sound test. Fronted by the beautiful Tipriti Kharbangar and the clinical Rudy Walland, they played a mesmerizing blues set, topping it off, with what was unarguably the sexiest song of the evening – “If you were my guitar” – after which we rushed back to the Tour Bus and sprawled down upon the ground to give our feet a much needed respite, while Calcutta Local performed in the distance.

It was roughly 7:30 PM when we hoisted ourselves once more to plod over to The Dewarists’ stage yet again. The sun had set by then, and the stage was lit up in a shimmering shade of blue. The characteristic strumming of an acoustic guitar floated out of a dense cloud of dry ice, as the ever recognisable voice of Rupam Islam broke out in all of its grungy, acidic, melody. What followed was probably the best one hour of the whole evening. 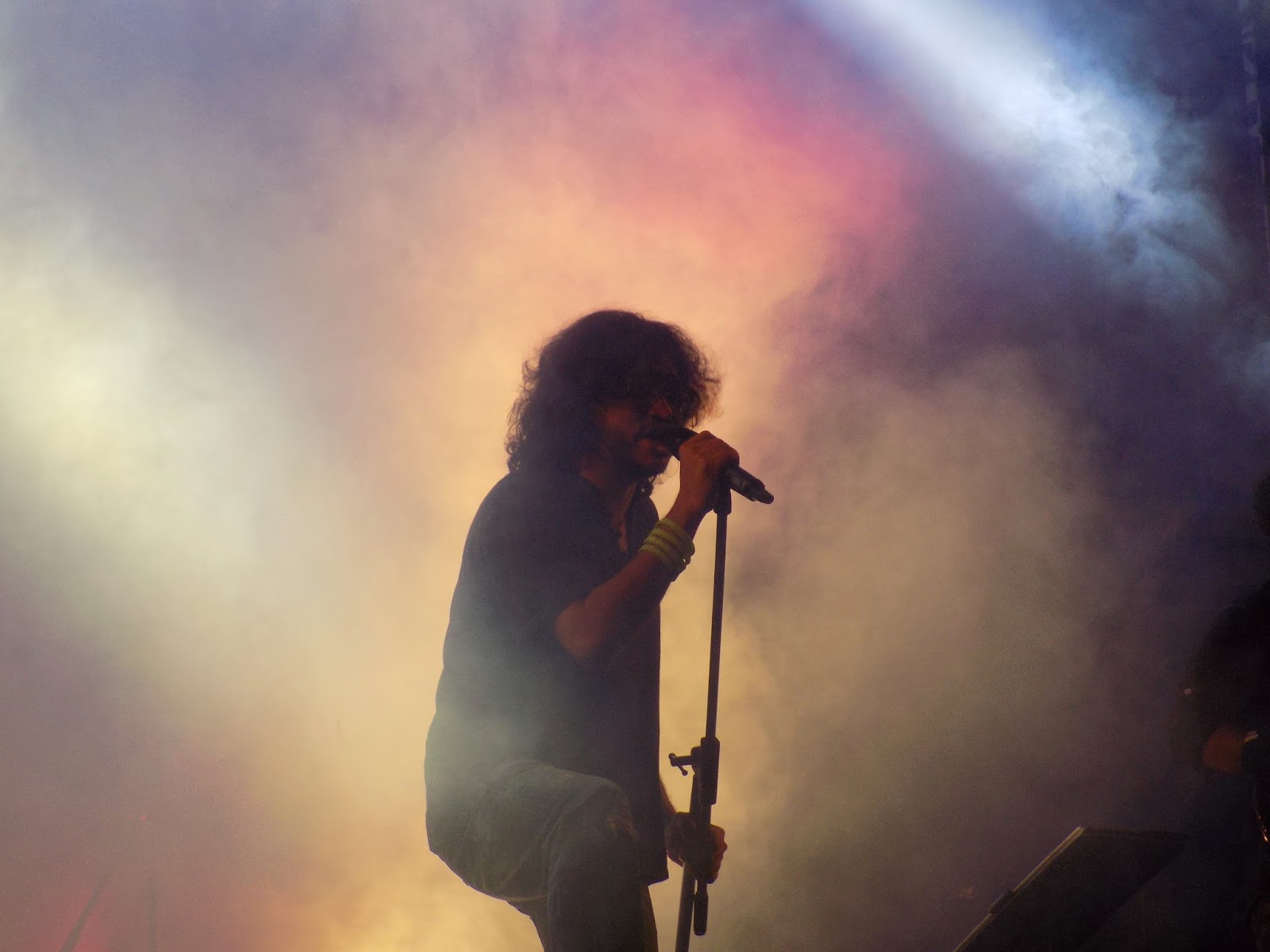 Yes, as a Bengali who has grown up in Calcutta through the 90s and the 2000s, this wasn’t my first Fossils concert. But boy, oh boy, this is one band that I don’t think I can ever grow out of. As their cult classics rolled past, I think I lost track of time, space and everything in between. (What comes between time and space, I wonder?) An emotionally charged Rupam then hailed this as a definitive moment in the timeline of Bangla Rock, a moment when Bangla, as a language has broken through its limiting shackles and onto a cosmopolitan stage, and Bangla artists were seen as equals, alongside national and international artists of repute.

After a terrific one hour of intense Bangla Rock, we took a short break to refill ourselves and then went over to the Tour Bus to see a crooning Monica Dogra, solo. Strangely enough, her iconic mid-riff was nowhere to be seen, and even more strange, she wasn’t gyrating at all. Her gyration and mid-riff were all that I remembered from my last sighting of her at Bangalore, but this time around there was none of that. Truth be told, I wasn’t really paying much attention to what she was crooning, because it wasn’t something that excited me terribly, and because I was pretty certain that I had already seen the best of what the evening had to offer. I just sat there, because my poor feet seemed like they would revolt otherwise, and because I really needed this rest before the final two acts of the evening – which as we had guessed, and as we verified, were as far apart in styles as two dissimilar things could ever be.

On one hand, there was Bhayanak Maut, on the Bacardi arena, who are often touted as the heaviest, and the baddest musicians, in this part of the world. On the other hand, there was Amit Trivedi, the far more mellow and mainstream composer of Bollywood filmy songs. We, as gentlefolk often do, decided to focus on the latter, not because we were particularly fond of Amit Trivedi’s music, but because we had run out of steam and had no inclination to headbang and die brutal and anonymous deaths at the “happiest music festival in the country”. Therefore, after spending a short while amid the frantic growling and mosh pitting at the Bacardi arena, we decided to anchor ourselves at the Dewarists’ where we lived out the evening, till the end. 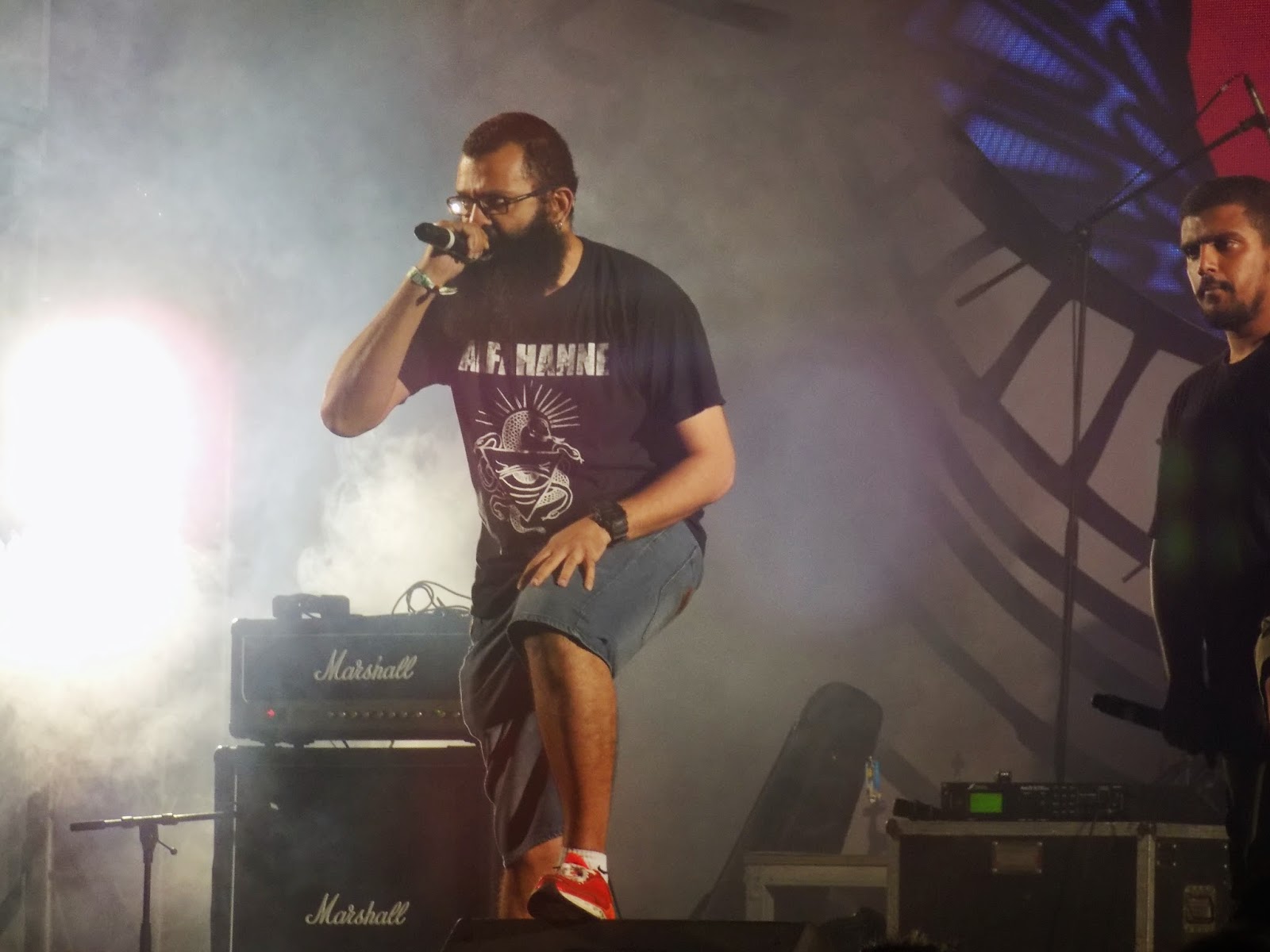 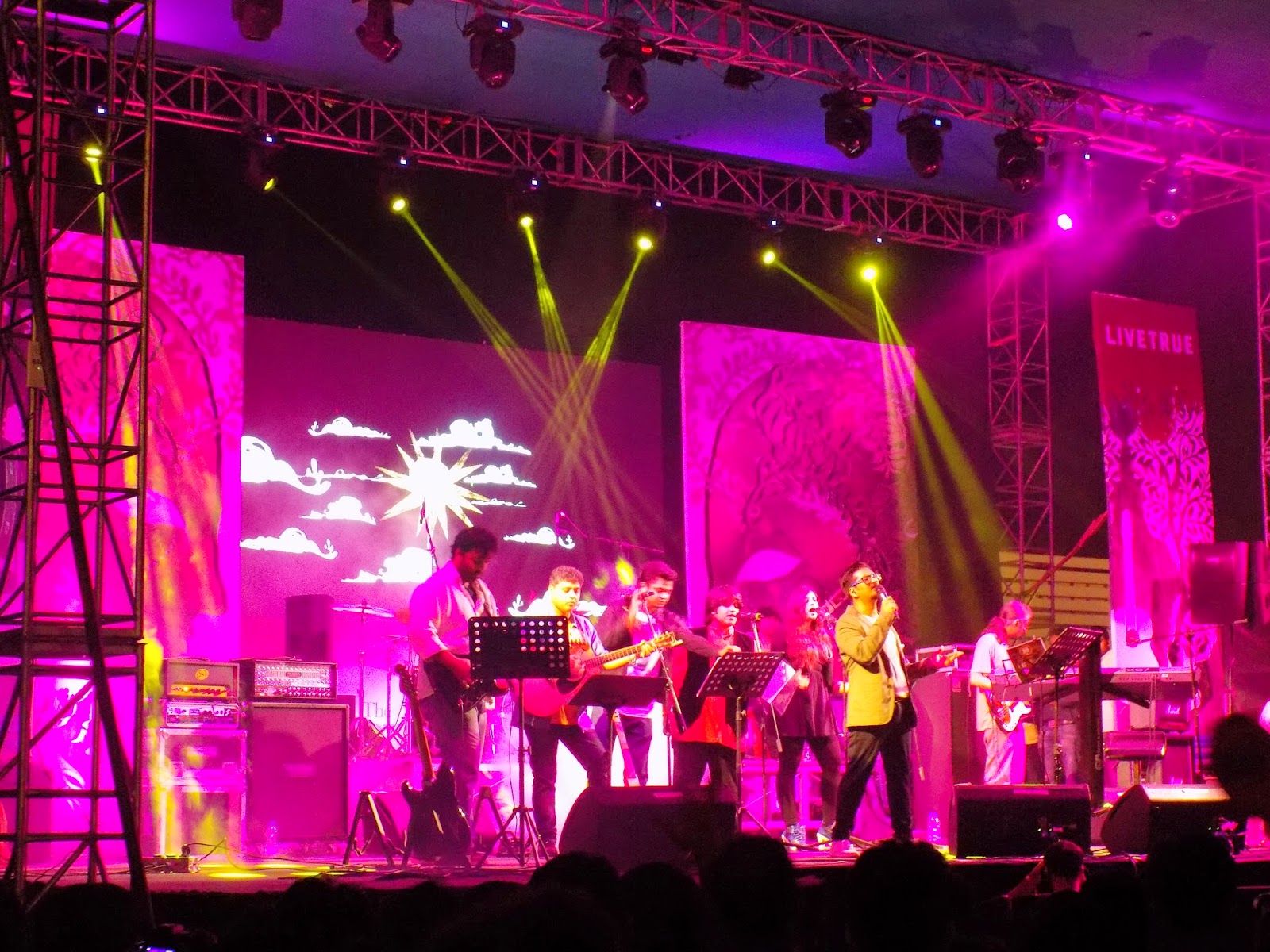 To cap it all off, it was a pretty awesome evening. The high points had been the Blackstratblues, The F16s, Soulmate and Fossils. The not so high points had been the entire  Micromax Mega Mix stage (which I had ventured towards, a couple of times, but had found it distasteful), and the unnecessarily crooning Monica Dogra with a non-existent mid-riff. But there had been more highs than lows, and some great highs at that. We hoped it would continue the next day, and we weren’t disappointed.