I wrote this article for Top Five Records. Read the original here.

November is a wonderful time to have open air festivals in Calcutta. The weather, after having remained consistently lethal for the past six odd months, begins to enter a rather pleasant phase. The sky is the perfect blue. The heat doesn’t kill you any longer. The sweat dries faster. A zephyr actually exists. And best of all, unlike other places (cough cough, Bengaluru) where the rain often plays spoilsport, it remains wonderfully high and dry all day round.

So when Day 2 of the Calcutta edition of the Bacardi Nh7 Weekender kicked off on a fine Sunday afternoon, it was all smiles, laughter and cheer that rang around the beautifully set up Nicco Park grounds.

I was slightly late to the show that day, and when I reached, the first act had already begun at the MTS Discover arena – the French duo, As Animals. Their music was a rather interesting conflation of electronic and alternative, and seemed like the sort that you’d enjoy even more when intoxicated – which the lead singer Zara, going by her completely phased out appearance, probably was. But let that not deter me from transcribing the acts that were to follow.

After a brief stint with these French trippers, we crossed the English channel, and went off to the Red Bull Tour Bus to see Houdini Dax, an extremely … (no points for guessing) British three piece brit-rock suit. Houdini Dax hail from Cardiff, Wales, and they look and sound absolutely, and quintessentially British. They played a rather energetic gig upon the Tour Bus (which included a surprise Beatles cover), and the frontman even ventured down in an attempt to woo the women with his rather “fragile” paper heart. And oh! Did I mention that their bassist looked like a complete Paul McCartney knock off?

While the Houdini Dax was galvanizing a small crowd around the Tour Bus, an eclectic Indian folk outfit was slowly turning out to be the center of attraction of the evening. Maati Baani at the Dewarists’ Stage packed an incredible amount of Indian punch. They had it all – Hindustani classical, Bengali baul, rustic folk, Sufism – peppered with a dash of new age funk and world music. Fronted by the beautiful Nirali Kartik, and a host of other supporting musicians, they carved out a beautiful one hour of varied and soulful compositions in an environment that was predominantly Western-heavy. 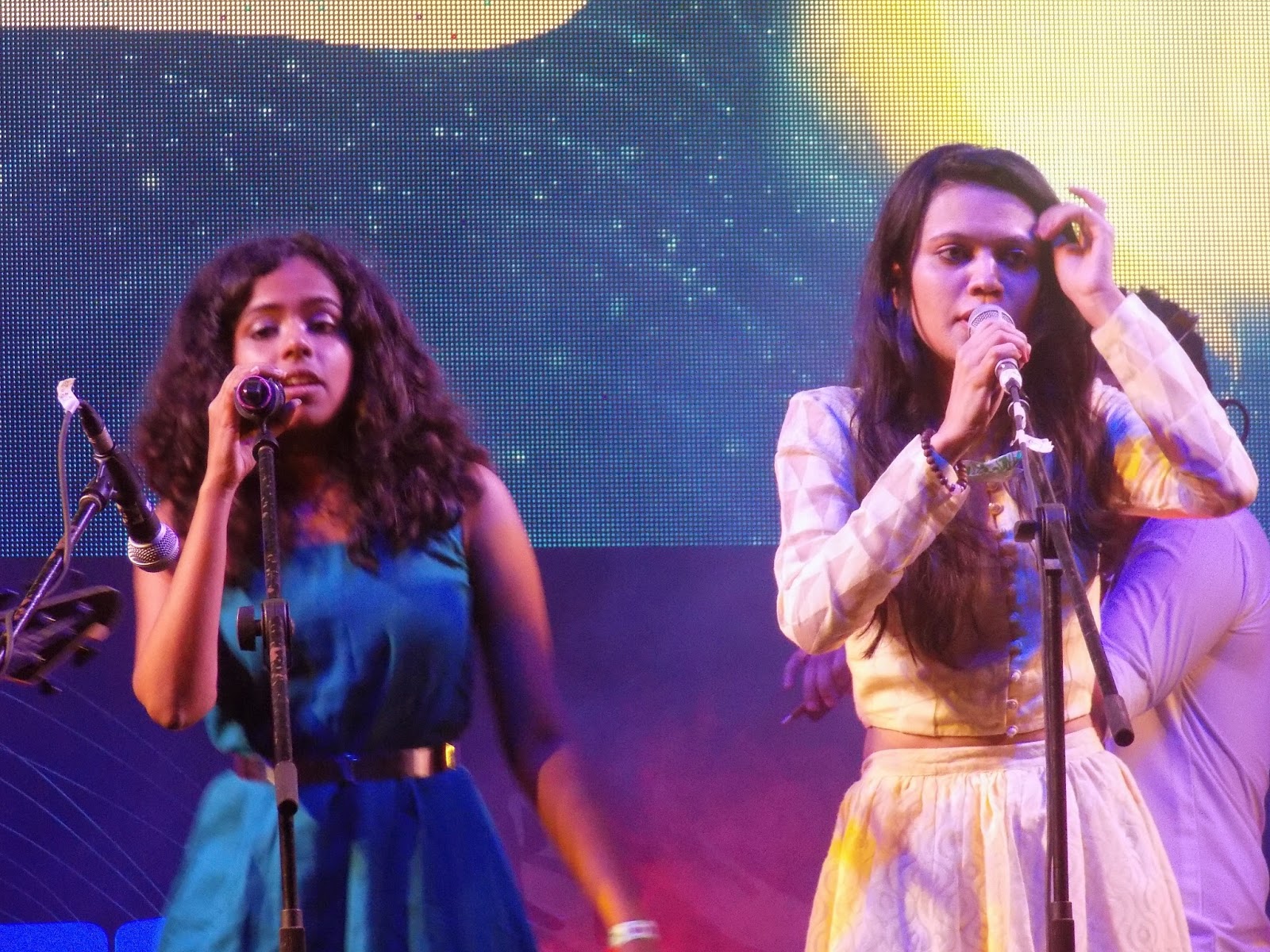 Meanwhile, the ebullient (and yet another French) duo, The Inspector Cluzo had started creating a ruckus at the Bacardi arena. We went over to find a bearded frontman hurling profanities at everything that was American and British. He proudly touted the fact that their music was absolutely natural – with nothing that was pre-recorded and sampled – and all that they used to perform live, were not laptops and tracks, but their bare hands. On that note, he sent a few heavy riffs flying into the crowd while the drummer entertained us in some rather unique ways. Of the number of songs they performed, one was particularly memorable. This one, titled “F*ck the bass player”, was basically a song about the uselessness of a bassist in a band. Needless to say, they didn’t have one, but it did raise several eyebrows and ruffle many puritan feathers in the crowd. 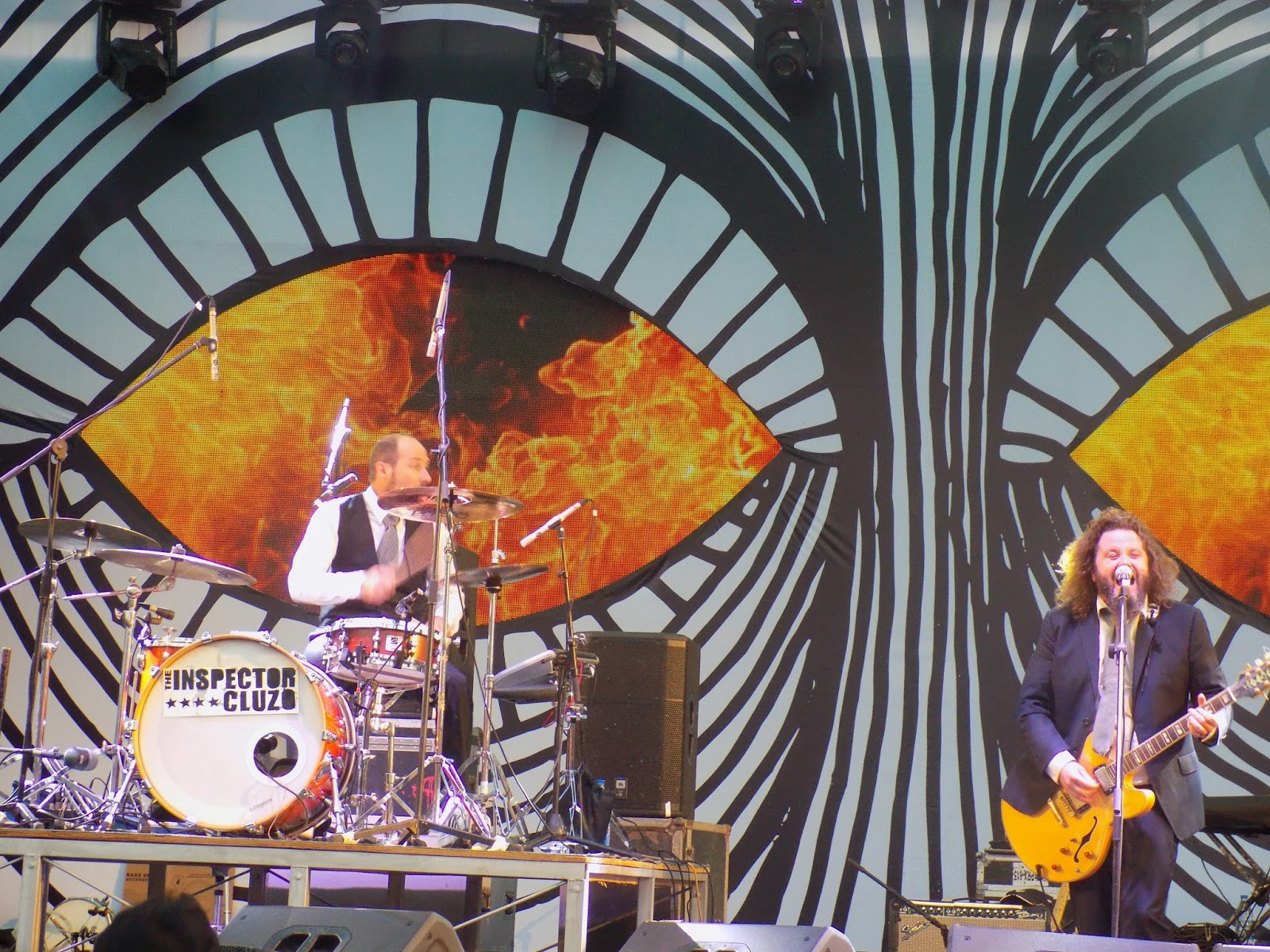 The Inspector Cluzo then gave way to the Sky Rabbit on the Red Bull Tour Bus. This four piece electro-rock group from Mumbai played out a rather lackluster gig, following which we headed back to the Dewarists’ stage to see Appleonia – which wasn’t all that great either. The next big thing that we were particularly stoked about was Indian Ocean, which was still a good one hour away. So to while away this gap, we decided to remain near the MTS Discover stage, and munch on pizza slices, to see who filled in for Pentagram (who had cancelled earlier that day). And boy, were we in for a pleasant surprise.

The Ganesh Talkies, fronted by Suyasha SenGupta turned out to be The Undisputed Find of the Day. Suyasha’s captivating stage presence kept the whole crowd hooked while the extremely groovy rhythms and guitars kept a number of heads bobbing up and down. The Talkies’ set included songs from their Technicolor and Three Tier Non AC albums – the result being a heady mix of alt-rock, reggae and dance. 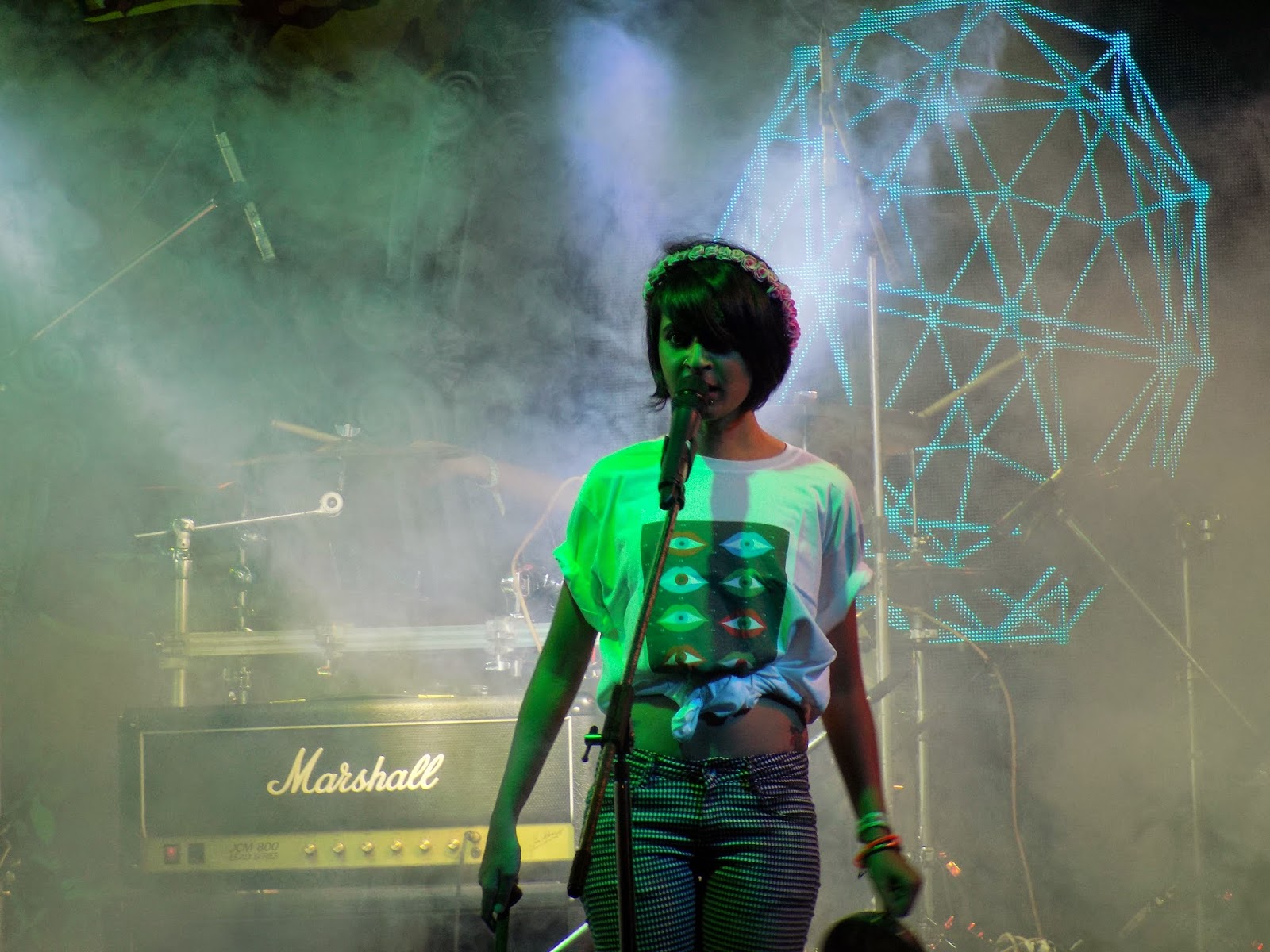 Next up, were two stalwart acts – both of which have been around for more than two decades and enjoy a cult following in the country: Mumbai based alt-rockers Indus Creed on the Bacardi Stage and Delhi based fusion masters Indian Ocean on the Dewarists’. For me, the decision was a no-brainer, and after having spent not more than ten minutes being bemused by the former, I headed off to have my mind blown to smithereens by the latter.

Indian Ocean is one of those bands that aren’t just heard or listened to. They are experienced. One’s perception of their music transcends far beyond the realms of the sensual, and borders on what could be called the spiritual. Be it Himanshu Joshi’s alaaps, or Rahul Ram’s bass riffs, or Tuheen Chakravorti’s Tabla – they manage to create those picture perfect moments when tranquility and ecstasy co-exist in harmony. Their gig that evening, was essentially part of their tour for promoting their new album Tandanu, and therefore most of the songs were new to me. The fact that they still managed to reach deep down and evoke a plethora of feelings just proved beyond doubt that they continue to be a class above the rest – even after all these years. 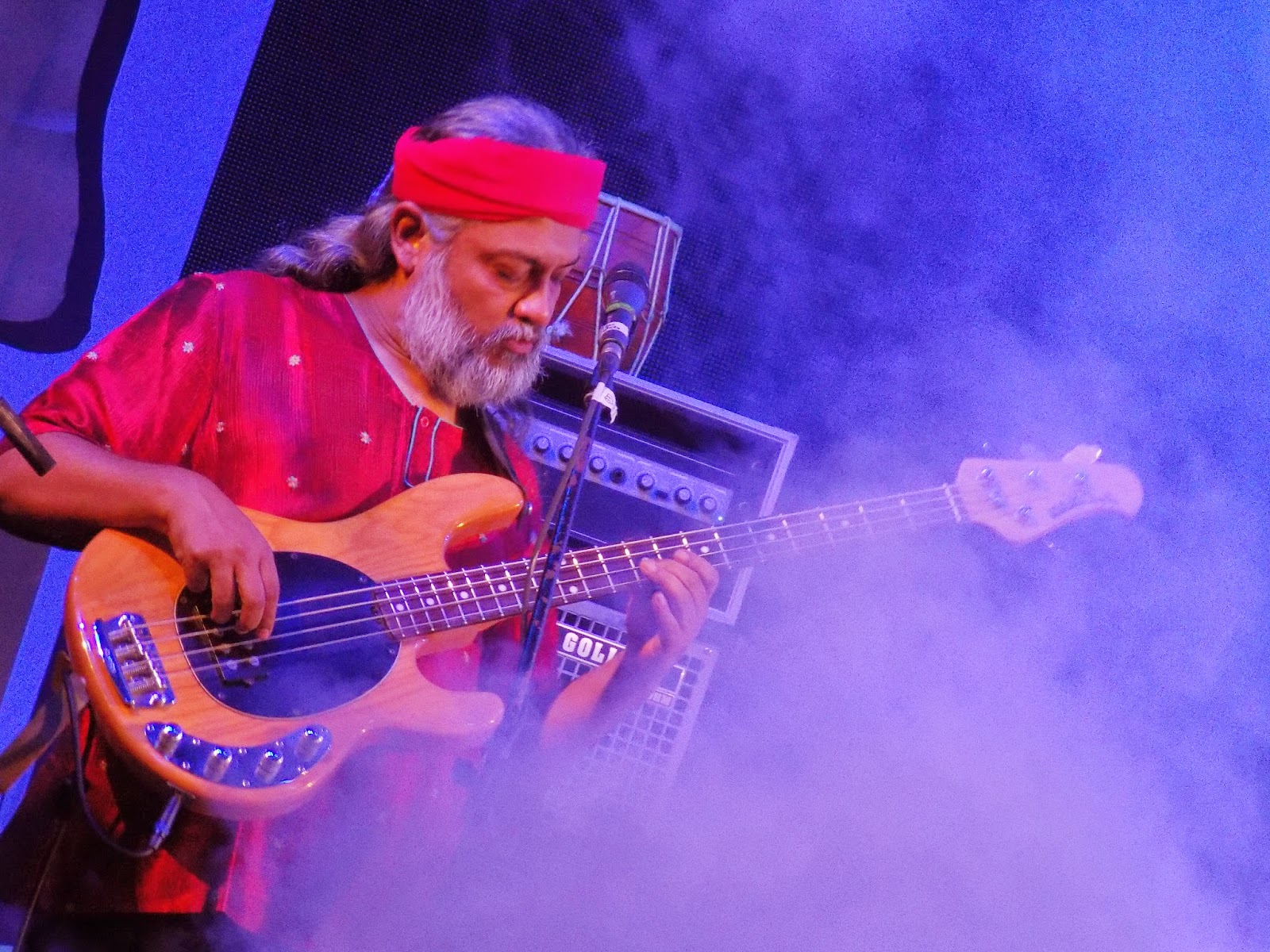 Towards the end of Indian Ocean’s masterclass performance, I had to take my leave to go pay a visit to the Red Bull Tour Bus where Sriram TT and his gang of garage rockers – Skrat, were setting out for a hard hitting, angst-ridden gig. This would be my third Skrat gig in a little less than a year, but it turned out to be as fun as it always had been. Belting out their heavy, riff driven melodies, and their tongue-in-cheek lyrics (“love is like pool / all colour but only balls”) they brought in a completely new dimension to the prevailing mood at the venue, which had just been charged up, rather emotionally by Indian Ocean’s poignant tunes. 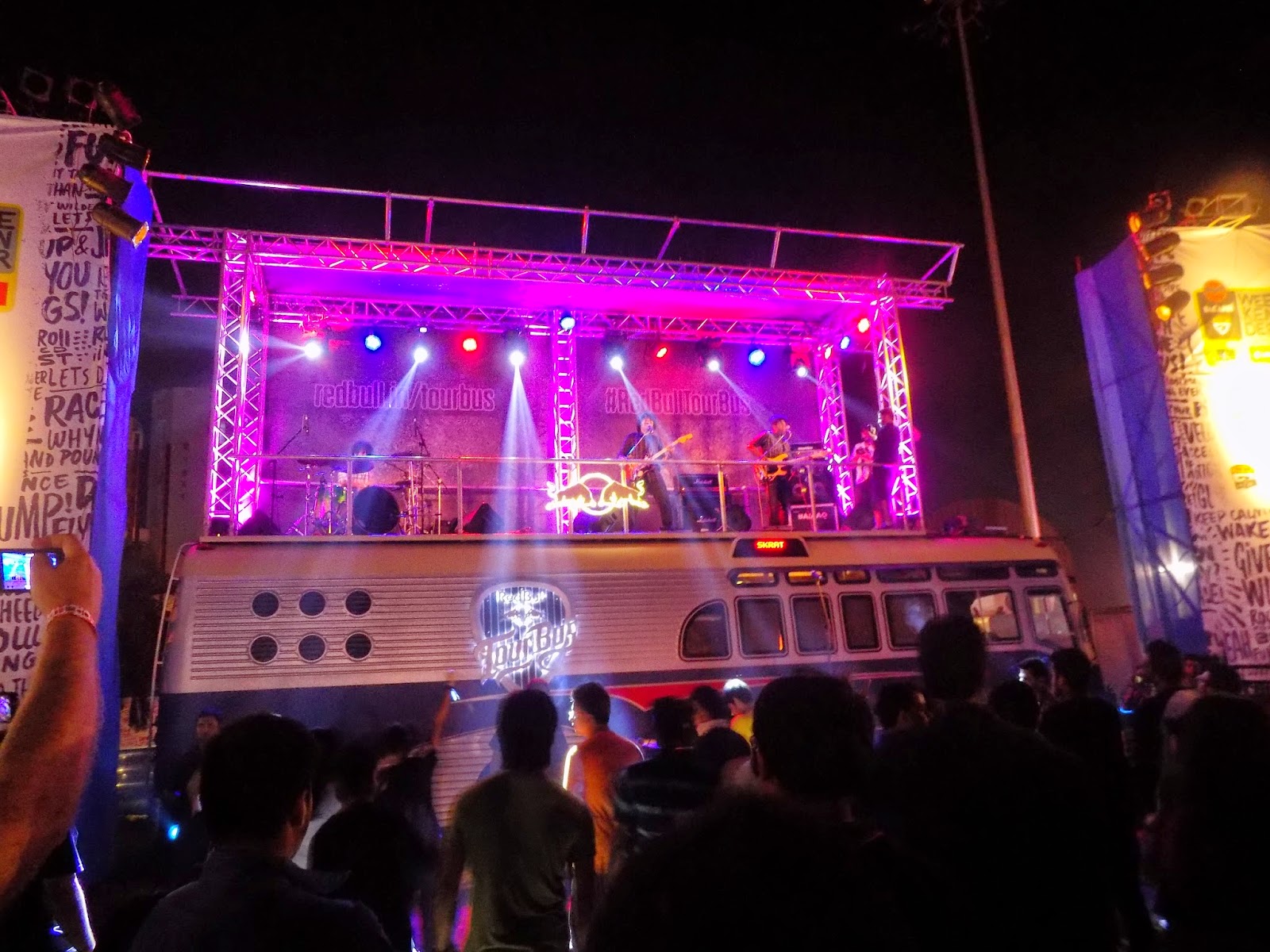 Forty five minutes of Skrat later, the entire crowd around the Nicco Park grounds gravitated near the Bacardi Arena where the headliners were about to take off. Mutemath, the American alt-rock group, who even boasted a Grammy nomination to their name, were known to some, and unknown to others. But from the moment they kicked off amid a flurry of confetti and electro-rock tunes, there was not one soul who didn’t have a huge smile plastered on his or her face. I’ll confess that I hadn’t thought so highly of Mutemath before (my primary exposure to their music being a soundtrack on the Asphalt 8 Android game) but boy. Were they bloody good! Paul Meany’s eclectic vocals, his dexterity with keyboards and keytars, Darren King’s thumping beats and not to mention Todd Gummerman’s wonderful guitar work – all fell in perfectly to deliver one of the best live experiences that I’ve ever seen in my life. They performed most of their popular hits, including “Chaos”, “Blood Pressure” and their Grammy nominated single, “Typical”. In the end, they added a wonderful twist when Paul got on top of a rather bling-bling mattress (or was it a magic carpet?) and went sailing over the crowd, while simultaneously performing with consummate ease. 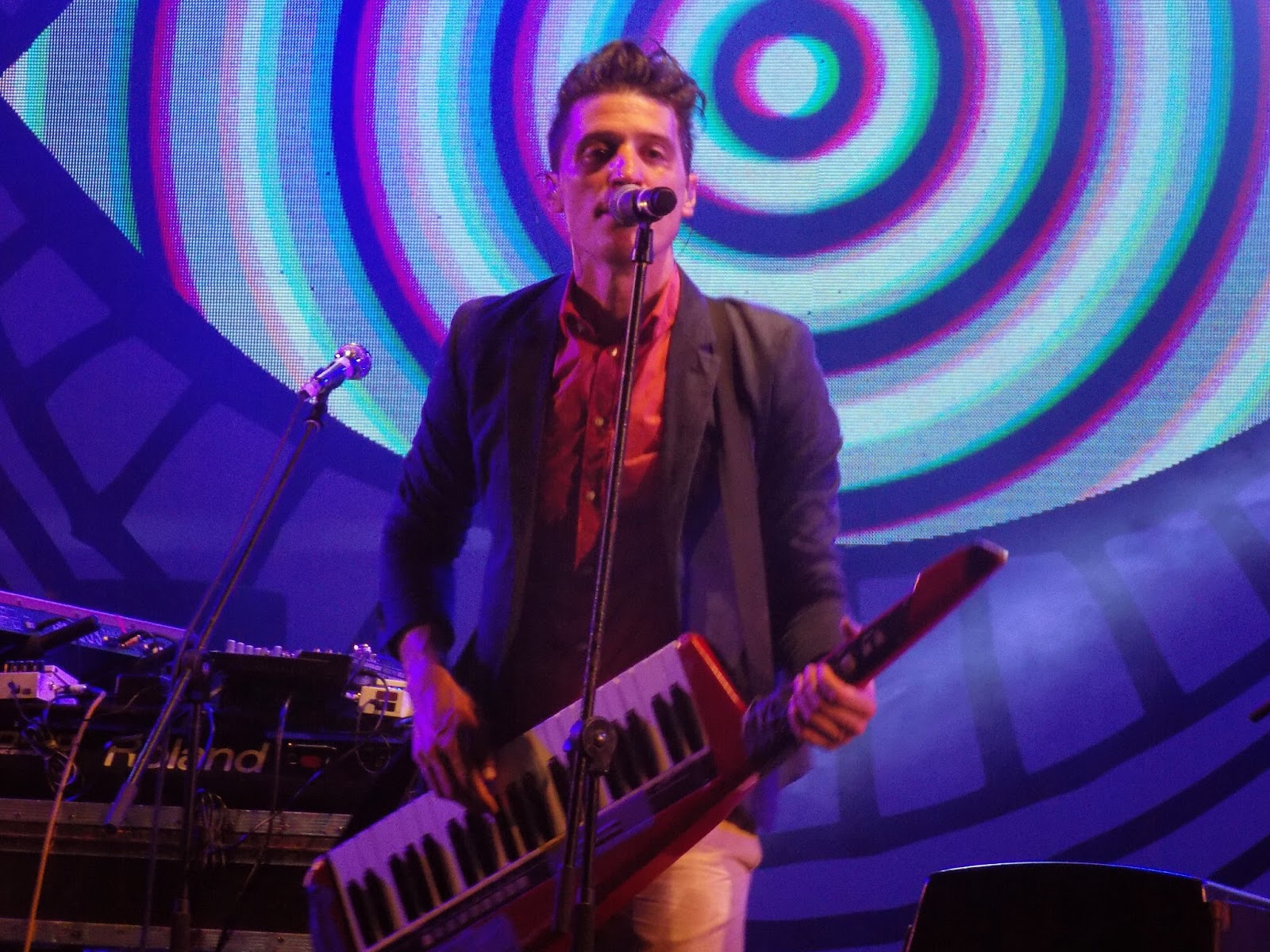 It was close to 10 PM when the burning embers of the fantastic evening began to fade. The lights on the stages had been turned off. One of Quidich’s supercool quadcopter-cameras whirred above my head. I looked around at the venue that was quickly emptying and  couldn’t for the life of me reconcile the pity sight with the extravaganza it had just hosted.

So there you are. That was the end of the epic Calcutta Weekender. It had been a grand success, but if I had to choose I would probably choose Day 1 over Day 2 as my favourite.

As they say after Durga Pujo here in Calcutta – “asche bochor abar hobe”,  you can rest assured that T5R will be back for it next year as well.
Email Post
Labels: calcutta music