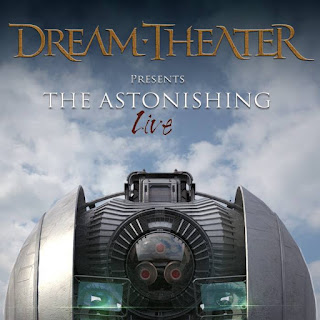 If you follow the concert reviews that I write for this blog (for example, this, or this, or this, or well, even this), you would notice my incurable – almost clinical obsession – with a rather particular genre of rock music – viz. progressive rock.

The one band that opened the floodgates of my obsession for this genre was Dream Theater. Of course, I had been listening to Pink Floyd before, not quite knowing that A Dark Side of the Moon was “prog”. Or that the Beatles’ Sergeant Pepper’s Heart Club Band had actually laid the foundation of the concept album – which has become central to prog music today. And of course, once the floodgates had opened, the usual prog suspects followed – from the 70s British scene right up to the progressive metal of today. But Dream Theater was that one band that really introduced me to the genre, made me aware of what the genre really entailed, and taught me how to appreciate music that’s instrumentally elaborate and technically sound. 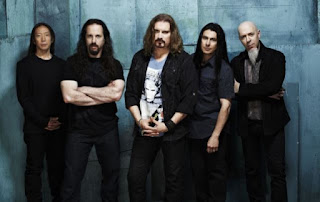 Thus, when Dream Theater announced their 2016 tour to support their new album, “The Astonishing”, it wasn’t long before I had a ticket for myself for their NYC show at Radio City Music Hall, on the 23rd of April.

Now, I am well versed with most of Dream Theater’s discography, but The Astonishing is a new album. It was certainly brand new when I booked my tickets – it had released only a week or so back. So getting to “know” the album would be central to the concert experience. Thus, during the next few months – right till the hour before the concert – I was on a mission to familiarize myself with the album, to the very best of my abilities. I’ve written before, how prog songs don’t hit you immediately. They aren’t like “Hey Jude”, or “Stairway to Heaven”, that you fall in love with, the moment you hear them. They require multiple listens; they grow on you slowly, steadily; and after you’re well aware of the various twists and turns that the song takes during its generally expansive lifespan, do you really begin to appreciate them in their entirety. The Astonishing is no different. However, from a Dream Theater perspective, it does see a marked departure from their usual albums. There are no longer gratuitous instrumental solos in each and every song. There’s no 20+ minute opus towards the end. Lastly, and most interestingly, there’s a lot more focus on vocals – arguably more so than on any other Dream Theater album so far.

All in all, by the time the concert began, I had assimilated The Astonishing thoroughly. I had poked and prodded every section in it with my my scalpel of musical critique. I had examined virtually virtually second of the album under my magnifying glass. In the end, I felt fairly prepared to enjoy the concert. It was after all, going to be my first Dream Theater concert – and I was determined to make it a memorable one.

The Astonishing is a concept album. In other words, it’s not a set of unrelated songs like a general music album. The songs make up a narrative, and they follow in logical sequence, one after the other. The narrative generally has characters, a plot, and a denouement. The story line in The Astonishing is a fairly typical one that one finds in progressive music. It explores themes such as dystopias, futurism, and creates a storyline set in a post-apocalyptic United States, where freedom of musical expression does not exist. Instead, all the music in this world is regulated by the Great Northern Empire of the Americas and produced by noise-machines or NOMACs. The plot follows the Ravenskill Rebel Militia in their efforts to defy this Empire using the power of their own music. Yes, the story does seem heavily inspired by Rush’s classic 2112, and also seems to draw from modern/popular fantasy franchises like Game of Thrones, and even Star Wars – but let’s get this straight – you really don’t get such albums these days. Sure, the world moved on from progressive rock in the 80s, but there’s still something about an album of this type – be it in the amount of thought that goes into it, or the incredibly high level of musical talent it showcases – that simply sets it apart.

Now, on to the concert.

A prog concert is a lot more than just a musical concert. There’s a lot of supporting paraphernalia – from sound effects, to props (remember Pink Floyd’s The Wall tour? Or Genesis during their Peter Gabriel days?) – that are used to create an experience that is more theatrical than simply musical. So was it the case with this. A number of tracks in this massive 34-track double album are purely synthetic tracks of pre-recorded sounds (Don’t roll your eyes, Pink Floyd used plenty of synthetic tracks too – like this or this). These pre-recorded tracks serve more of a narrative role than a musical role. Accompanied with videos and other props, these tracks serve the function of advancing the story. The first track for example, “The Descent of the NOMACS” – with its cacophony of electronic sounds – was used, to introduce the Noise Machines to the audience. As those sounds subsided, the instrumentals kicked in, and the music bridged into the second song, “Dystopian Overture” – a magnificent instrumental. And from there on, it was full-blown Dream Theater. The stage lit up in spectacular fashion, as John Petrucci, Jordan Rudess, John Myung appeared – seemingly out of nowhere – to massive cheers from the audience. Behind them, was Mike Mangini’s absolutely sensational double-decker drum kit. One could only discern the presence of a person sitting behind that contraption owing to glimpses of his flying hair that showed through the gazillion cymbals and drums that kept him engaged. The other highlight on the stage was Rudess’ keyboard, which looked more like a spaceship than a musical instrument. It swiveled around in all directions, about every axis, while his fingers performed the wizardry that has made him one of the greatest keyboard players on the planet. 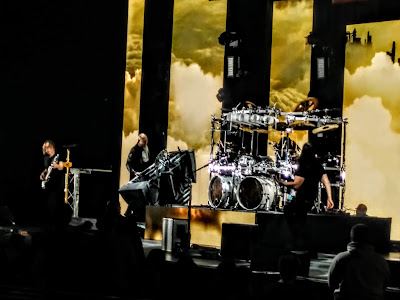 It wasn’t till the third song, "The Gift of Music", that James LaBrie appeared on stage, swinging his arms wildly, and beating his palms with the mic. The vocalist, who has been splitting fan opinions for more than two decades now, looked quite the character . However, to be fair to him, what he lacks in panache that the other band members possess, he does make up for with the effort that he puts in to every song that DT record. Sure, his voice isn’t to everyone’s taste, but one cannot deny the absolutely incredible vocal range (Learning to Live, anyone?) and technical ability that he brings to the band. In fact, I’d even go so far as to say, that The Astonishing showcases his very best efforts till date. Apart for a rather high-pitched and frankly non-melodic portion in Lord Nayfaryus, his contribution to every song in this album is fantastic. If you were to turn a blind eye to his “I’m trying to be rockstar, but I’m not” histrionics, and focus only on his voice, he really is phenomenal. Because, let’s get this straight – these songs are complicated. It’s not easy to deal with unconventional time signatures that change over time, when you are singing live. But LaBrie absolutely nailed them all. He reached every high note with the most consummate ease (Brother, Can you Hear Me?), he was well aware of every twist and turn the songs had throughout the concert – A New Beginning was particularly memorable. And in the end, one couldn’t but help feel bad for the amount of criticism this top-class vocalist draws from fans. 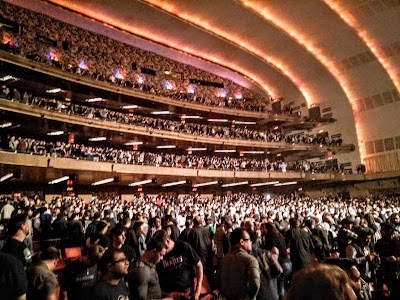 Nothing much needs to be said of the other band members. Being among the most decorated and critically acclaimed masters of their crafts, Petrucci, Rudess, Mangini, and Myung displayed a level of poise and technical proficiency that I’ve honestly not seen in a live concert before. Petrucci, the six-time G3 legend seemed to transcend all barriers of human ability with his guitar. Ruddess was in a league of his own, blitzkrieg-ing his way through his keyboard, and the arsenal of other fancy gadgets that he is well known to use. Myung, unarguably the most unassuming of the lot, kept the supremely difficult bass riffs ticking like clockwork. Regarding Mangini however, I had a few reservations – not because he was any less good at the drums, but because the drummer has traditionally been the virtual “front man” for Dream Theater. When the legendary Mike Portnoy left the band, the band didn’t just lose one of the greatest drummers in the world. The band lost someone who imparted an identity to the band when they performed live. If you watch videos of past Dream Theater concerts, you’ll see Portnoy, not just as a drummer, but as the real “face” of the band. He awed audiences with his techniques on one hand, and commanded their attention on the other. He masterminded the sound, and orchestrated the people’s emotions, . With him gone, and with his replacement, Mangini, being more of a drumming machine than a human being, the band sorely lacks a person who takes on that onus. Brilliant with the guitar as he might be, John Petrucci isn’t really the flamboyant performer who rivets the audience’s attention upon himself. Rudess is too cerebral, Myung, too modest, and while LaBrie gets an A for effort, he fails horribly when it comes to being a galvanizing front man.

And therein was my greatest disappointment with the concert. You couldn’t put a finger on any single thing that was “wrong” with it. The music was beyond phenomenal. Each of the band members was at his very best. The atmosphere was surreal. But what was lacking was a personal connection. It didn’t feel like a truly live concert. I could well have been watching a recording of the concert, and I doubt I’d have felt anything too different than what I felt that night. Added to that was the fact that notwithstanding how well I had assimilated this new album “within” me, I still wasn’t as familiar with it, as I am with their earlier work. Therefore, while Dream Theater still remains one of my top bands, (and I will probably not give up an opportunity to see them live again in the future), this particular concert, unfortunately, did leave a few things to be desired.
Email Post
Labels: music
Location: 177 Erie St, Cambridge, MA 02139, USA