Hacker, Hoaxer, Whistleblower, Spy: The Many Faces of Anonymous - a book review 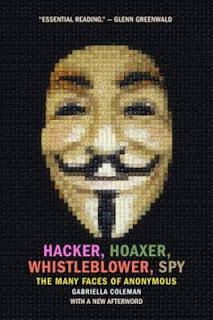 In August 2010, The Washington Post ran a news report on the website 4chan and its role in fomenting massive disruptions on the internet using collective online action. That was a time when 4chan, then a seven year old website, built by a 15 year old kid, and managed decentrally by large numbers of anonymous users, had only begun to make its presence felt to the outside world. Back then, 4chan was known only by the more erudite of the Internet denizens. It was a shady place, where not too many people ventured into, even fewer returned to. The close-knit community of nameless strangers who flocked around the website, sharing messages, images, and videos, lived their own underground life - laughing at their own jokes (which were often tasteless), poking fun at the outside world, and throwing out a prank now and then. Interestingly, and as author Gabriella Coleman (2014) describes in her book, it also proved to be the breeding ground of one of the most enigmatic activist groups of all time - the Anonymous. Hacker, Hoaxer, Whistleblower, Spy details the rise of Anonymous from the seedy servers of 4chan, and their metamorphosis - from a loose group of miscreant porn loving hackers, to an online political force forever willing to take on the strongest global institutions.

Coleman is an anthropologist who stumbled upon Anonymous while studying the Scientology system of beliefs and faiths. The book begins by introducing the reader to a sinister video on YouTube, posted by Anonymous in the year 2007, in response to Fox News’ coverage of the “Internet Hate Machine”. The narrator (in the video), a faceless man, speaks in a cold, ominous voice, and announces the arrival of Anonymous. The voice concludes with a chilling threat “And you have now, got our attention”. This, as Coleman acknowledges, “certainly had [her] attention”, and was what led her down the rabbit hole of investigative research.

Anonymous was born in 4chan when a group of members got involved in an online tussle with the Church of Scientology, over their censorship of the internet. Project Chanology, as this movement came to be known as, tried to disrupt the functioning of the Church by launching DDoS (Distributed Denial of Service) attacks on their website. Dabbling in these small skirmishes emboldened Anonymous and by 2010, they had scored their first significant political victory when they took down the PayPal website using similar DDoS attacks. This was in reaction to PayPal’s refusal to let people donate to the whistleblower organization Wikileaks, which had in 2010 caused worldwide ripples by releasing classified government secrets. From then onwards, Anonymous went from strength to strength, exposing corrupt government organizations (particularly in Tunisia during the Arab Spring), lending support to activist movements (like Occupy), and taking its own brazen moral stand on a number of political issues around the world.

Coleman’s account is engaging, primarily because she is always in the thick of the action. Her narrative flits around virtual, as well as physical spaces. She is seen, at times chatting with anons (as members of Anonymous chose to call themselves) over IRC, at other times meeting them physically, befriending them, gaining their trust, and curating all the information they give to her. The pages are fraught with logs from IRC chats, where she showcases various aspects of her conversations. Though her research is meticulous and her writing, excruciatingly detailed, the book doesn’t read like an academic book at all. She uses vivid imageries to nail down the idea of Anonymous - describing it as an “amorphous and formless entity existing in some mythical and primordial state of non-being, only solidifying when an outside agent utters its name” (p 113). She espouses Anonymous parlance, describing their work as “ultra-coordinated motherfuckery” (p 6, 60, 81, 396); she talks about how the group grew like a “wily hydra” (p 47), with the sole intention of “trolling” people and institutions who they believed deserved to be trolled. She proffers vignettes into the functioning of Anonymous by profiling some of their most influential members, whom she had had the luck of getting to know personally. These included the firebrand Jeremy Hammond, the propaganda master Topiary, and the intriguing Hector Monsegur (Sabu). The development of the character of Sabu reads like a thriller within the main narrative through lines and lines of IRC chat. Sabu is originally shown to be a radical anon, responsible for much of the work of the two splinter groups of Anonymous, the LulzSec and the AntiSec. Later however, he is revealed to be a snitch, planted by the FBI within Anonymous itself. The emotion during this revelation is palpable, which points to one of Coleman’s major objectives while writing this book, that of destroying the notion that Anonymous is unanimous. She is dogged in her pursuit of bringing out the individuality of the various members, thereby attempting to systematically deconstruct the idea of uniformity that hacktivists in general, and Anonymous in particular, are often associated with.

In her general assessment of Anonymous, Coleman is diligent in her efforts to remain unbiased. She extols much of the work they have done, stating that Anonymous generally fights for democratic institutions and for things that most of us support - privacy, government transparency, internet freedom, and so on. While she is also critical of much of their handiwork, her loyalty and sympathy towards the group - probably the result of her deep involvement with them - often shine through her writing, thereby compromising on her intended objectivity (“What began as a network of trolls has become, for the most part, a force for good in the world” (p 50), “The emergence of Anonymous from one of the seediest places in the Internet is a tale of wonder, of hope, and of playful illusions.” (p 50-51).

Despite its lack of a scholarly level of objectivity, Hacker, Hoaxer, Whistleblower, Spy is an important work for several reasons. For one, it is the most exhaustive account of one of the most sensational social movements of the 21st century. Two, it creates an extremely readable story out of “wires, transistors, and Wi-Fi signals” (p 115) - by invoking the human element behind the lines of computer code. It turns faceless, nameless anons into human political actors who we can all relate to, and have emotions for. Lastly, it establishes a strong case that the changing shape of 21st century protest is there for everyone to embrace and adopt.

In fact, to put it in Coleman’s own concluding words, “the power of Anonymous’ eponymous anonymity is that we are all free to choose, whether or not to don the mask” (p 400).
Email Post
Labels: books Internet
Location: Cambridge, MA, USA