The best mysteries of Isaac Asimov : a book review 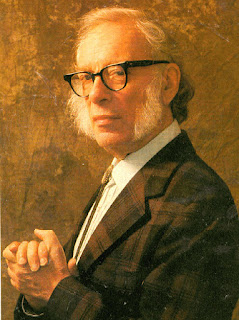 Isaac Asimov is known the world over as the maestro of science fiction. Not surprisingly, because along with Arthur Clarke, it was he who was instrumental in cementing the roots of the science fiction that we know today. Science fiction had existed before, in the ambitious works of Jules Verne and H G Wells, many of which continue to awe us today owing to their sheer clairvoyance, but in recent times the mainstream popularity of the genre was solely owing to names like Asimov and Clarke. Asimov with his epic Foundation series and ground breaking Robot stories, and Clarke, with his Rama saga and series of Space Odysseys, formed a cult following that has flourished, and continue to grow till date.

This post is however not about Asimov, nor is it about science fiction. Curiously, little known to many, Asimov wrote a host of mystery-thriller stories as well. They were written for newspapers and magazines more so than as part of his full time authorship. 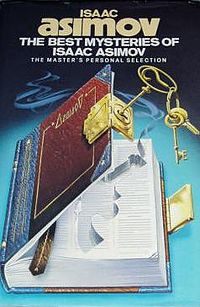 The Best Mysteries of Isaac Asimov is the definitive compilation that contains every single mystery story ever written by the master. The book is divided into three sections.

Stories in the first, dubbed the 'Black Widower Mysteries' are all set at the Black Widowers' Club, a certain stag club, whose members are all elitist upper class Americans. Each story revolves around a meeting of the members of the club where one member brings a guest who has a peculiar predicament. The solution to the predicament and the lead-up to the solution forms the bulk of the story, and it is inevitably arrived at by Henry, unarguably, the most immaculate butler in the history of English literature, second only to Jeeves, (and maybe, Nestor? Umm. Nah.). The solution is, needless to say, sheer genius, and blows your mind. One is compelled to make colon Os and drop their jaws in sheer amazement and wonder at the ingenuity of the plot.

The stories in the second section, dubbed the 'Union Club Mysteries' are equally mind-boggling pieces of art. Here, the protagonist is a certain Griswold, a wizened old man, who lays slumped in one armchair, raising his voice to make himself heard, and to tell long tales that seem to make no sense, till the end, where his tale perfectly fits into the current situation and produces an amazing solution to whatever problem the members have at hand.

The third section consists of miscellaneous mysteries that don't fall in either of the aforementioned sections. These vary in length, plot complexity, but are invariably those wherein the protagonist rarely gets off the chair he's seated in, or moves out of the room where he is.

The thirty-one stories in this book, are better read than talked about. They add a new dimension to the stereotype that the thriller genre has grown to become, and immediately dispenses the myth that thrillers must have action and violence to thrill the reader. The stories are superlative from the literary point of view, and are sheer intellectual masterpieces; there's one story about the mysterious psychic powers of a little girl; another one where the secret to a young man's happiness lies in cracking a cryptogram; yet another where the solution to a puzzle is one number out of one million possible combinations. and yet another where the solution lies in reading a road sign with your head tilted. Moreover, each of the stories, has a lively commentary and an introduction, written by Asimov himself which adds a nice personal touch too.

Insanely arbitrary, outrightly outrageous at times, yet logically, absolutely sound and air-tight, these thirty one riddling tales form a compendium that any hardcore Asimov fan would treasure, and any book lover would love to add to his collection.

Not the sort of book you'd want to borrow from the library, or from a friend for that matter. Instead, the sort that you would want to shell out money for, and possess for eternity.

Anonymous said…
Each of the mysteries or puzzles is solved in a very scientific way ! Very appropriate for a scientist / SF writer ! Lovely book
11 June 2011 at 21:37

Avada Kedavra said…
He is one of my most fav writers ever. Just loooove the foundation series. Might as well pick this one up.
13 June 2011 at 01:05