A Time Travel through Incredible India - 2 : A Boat Ride through a Marble Palace

Our next stop takes us to Jabalpur - 227 km to the west of Amarkantak and some 70 odd km from the National Fossil Park at Ghughua - which we covered in the previous post. 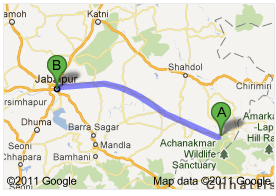 There is nothing spectacularly historical or archaeological in this city - but what sets this city apart is its proximity to one of the finest river valleys in the country - that of the Narmada. We've all read about the Narmada in our geography books - how it's the traditional boundary between North India and South India, and how it's one of the few peninsular rivers to flow westwards from its source in Amarkantak (which you might recall from my previous post) to the Arabian Sea, through a valley between the Vindhyas (to its north) and the Satpura (to its south) range.

Quite close to the city of Jabalpur, is a place called Bhedaghat in the Jabalpur district of Madhya Pradesh, where the Narmada carves out a gorge through rocks made out of pure marble. And the breathtaking beauty of this marble-valley is one of the primary reasons that has helped tourism flourish in this state,

There are two ways of experiencing the marble rocks - both of which are splendid in their own unique way. The first is by taking a cable car and getting a bird's eye view of one of the best portions of the valley - with a beautiful waterfall to boot. The second way is a 50 minute boat ride down the valley and  getting "up close and personal" with the rocks.

The boat ride through the valley revealed some beautiful natural marble "sculptures" - which are mostly figments of human imagination, humourous nevertheless when explained. I have included some of them in the slideshow below.

This completes the Jabalpur chapter of this travelougue. Next up, Bhopal, and cave paintings of the early man and the iconic Ashok Stambha at the Sanchi Stupa.