A Time Travel through Incredible India - 5 : Muslim Palaces at Mandu

This post was later submitted during an internship program for Youth Ki Awaaz, India's leading youth platform. You can read the article here as well.


We are all aware of the monumental standards that the Mughals set when it came to building palaces and pleasure domes for themselves - yeah, we've all seen the Taj Mahal, Humayun's Tomb et al.

Now little known to many, before the Taj Mahal was designed, the architects drew inspiration from another, albeit less grander Muslim piece of architecture. That, and various other exquisite Muslim palaces and pavilions form the fifth and the closing part of my Madhya Pradesh travelogue.

We leave Bhopal and travel by road to Indore. The distance is a little less than 200 kilometers and can be covered in two-and-a-half to three hours, on a usual day. 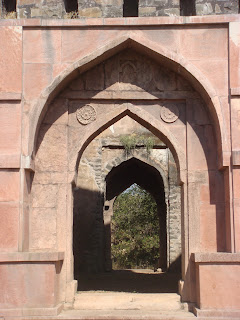 Our place of interest is not Indore however. It is 100 kilometers south west of Indore, and this place is the ruined city of Mandu. Established in the 10th century by Raja Bhoj, it gained prominence during the Mughal rule in the Medieval Age, as the capital city of Hoshang Shah, the king of Malwa. After the Mughals however, when the Marathas shifted their capital to Dhar, the importance of the town waned.

Mandu is home to a number of beautiful Muslim palaces. The most noteworthy of them, being the Jahaj Mahal, a huge ship-like palace, positioned between two huge lakes (which still exist, but are much smaller). The Jahah Mahal was built by Hoshang Shah, as his harem, and it was meant to give a sea-like ambiance to the lady members who stayed there - with the cool wind arising from the cross-ventilation between the two lakes.

Beside the Jahaj Mahal, there is yet another exquisite palace, albeit smaller, known as Hindola Mahal, which features sloping walls on its three sides - to give the impression that the entire structure is swaying with the wind.

All these do make one wonder on the creativity of the architects in those times!

The next place that we visit is Roopmati's pavilion - a "pavilion" that was built by Baz Bahadur, the last sultan of Malwa, for his Hindu queen - Roopmati, a singer and Rajput by birth. The pavilion was built for a specific purpose - to be a seat for the queen while she would gaze down the Narmada valley at the flowing waters of the Narmada. The pavilion is perched atop a cliff overlooking the valley - the Narmada is not visible to the naked eye, but there is a telescope that allows one to see it from the terrace.

Beside the Pavilion is the palace of the sultan Baz Bahadur himself.

The Masjid shows the confluence of two unique architectural patterns, the Hindu straight-cut-rectangular dharmshala style, and the second, the curve-oriented and arches of the traditional Mughal style.

That was it. This is the end of the travelogue. It was an incredible learning experience for me. I hope I have been able to share most of what I felt with you.