A Time Travel through Incredible India - 4 : Stupas at Sanchi

This post takes us back to Bhopal and then some 60 kilometers to its north west - to Sanchi. 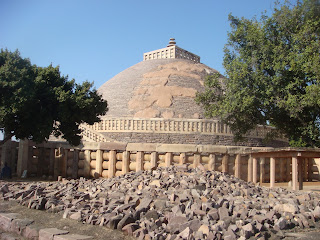 Everyone has heard of Sanchi. We've all read about it in our History books, seen the beautiful Stupas that make Sanchi so important today, in print.

Trust me when I say, the real thing is a totally different deal.

Back in the times of the Maurya Empire (circa 250 BC), when the newly found faith of Buddhism was fragmenting, a few hundred years after the death of founder Gautam Buddha, it was King Ashok who took upon himself the monumental task of propagating the religion and methodically channelising its progress.

And thus the construction of the Stupas was started. Stupas are essentially round, mound like structures, housing significant Buddhist relics; Today they are some of the most iconic historical structures of India, and with good reason. When India won her independence in 1947, Jawaharlal Nehru was quick enough to recognise the Ashokan Stupas as a aymbol of the very beginning of the existence of the Indian State. Before Ashok, India had existed physically and geographically, but the concept of a political state, stretching from present-day Kashmir to Kanyakumari, was unheard of. Ashok was the first emperor who consolidated most of the region of the present Indian subcontinent into a single political entity - and thus, this period can safely be considered to be the beginning of an Indian polity.

It was because of this, Nehru established the Ashok Stambha, the pillar-head of the oldest (southern) entrance gate to the Stupa, as the national emblem of India.

I shall stop this rant and shall provide the customary slideshow. I hope you like the pictures.

The next and hopefully the last part of this travelogue shall take us to Indore, and to Mandu - the site of some beautiful Mughal architecture from Medieval India.