Harry Potter and The Deathly Hallows part 1 : because a review is better late than never!

When I  was a kid I read a lot of Enid Blyton, like most other kids,. She was essentially the one person who made me read, save for my father who brought me her books. It began with Noddy, then went into more mature stuff (for want of a better word) like ... the Wishing Chair and the Faraway Tree ... where there were TopsyTurvy Worlds and gnomes and pixies and thought bubbles and children and ... well, you get it don't you?

Something which continues till this day.

When I read Harry Potter and the Deathly Hallows for the first time, I ... well confess, I had cried when Dobby had died. And, yes, after a long long time in a cinema hall, yesterday, I cried. I don't know why. Books invoke stronger emotions in me, than movies in general, but, I don't know how or why, the scene of Dobby dying, made all those welled up tears in my eyes, flow down my cheeks and ... well, the usual mushy stuff. 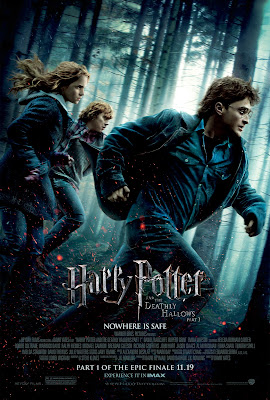 Reverting to what I had in mind when I started this post, a review.

HP 7 sure does a good job and there's no denying it. Finally a Harry Potter movie which doesn't make the non-Harry Potter follower (NHPF) feel like he's on a roller coaster wearing a blind-fold. Which I daresay, the past few ones did. They grabbed the NHPF by the scruff of his neck, popped him atop a steed in some Mexican bronc-busting arena and set the steed loose. Unlike those ones, where the non-HP-fan would die a cruel and generally painful death while watching the movie, gaping in utter incomprehension, at the sheer amount of tomfoolery that happened in front of his eyes, this one's milder. More composed. The NHPF, while watching this one, would just die a slow and painless death. Something akin to an overdose of sleeping pills.

So yes, from the point of view of the HP fanatic, this movie might just seem dull at times. Specially when Harry, Ron and Hermoine are wandering in the middle of nowhere; when Harry is in one of his many contemplative phases (weren't there just too many of them?). But the dull part is, needless to say, triumphantly overshadowed by the exceedingly well portrayed ... erm ... not so dull parts.

The story is not new. We all know what happens. We all know what will happen. Voldemort's forces are pretty much everywhere. Death eaters pop up now and then throughout the movie with alarming regularity. The Ministry of Magic has been taken over by the Dark Forces. The fiasco involving the seven Harrys in the beginning, laced with Mundungus Fletcher's double-crossing and the Weasley twins humour make for a cracking start. Hagrid's motorcycle escape and the subsequent regathering at the Burrow bring in the first couple of LumpsInThroats, more of which occur later. The first two are the deaths of Hedwig and Mad-eye Moody respectively. Then there's Bill and Fleur's wedding which fall prey to another Death Eater attack.  Harry, Ron and Hermione (HRH for speed's sake)  flee upon hearing Shacklebolt's warning and Disapparate to some place faraway. Voldemort's growing impatience and frustration as Harry gives him and his Death Eaters the slip many a time are evident. Then there's the finely rendered depiction of HRH breaking into the Ministry with the help of the Polyjuice potion and Umbridge's subsequent confrontation with Harry. Harry now has a price on his head and he's wanted "Undesirable no. 1" by the Wizarding community. The Ministry's malpractices are on the rise and every possible bit of action is taken to ensure the destruction of Muggle borns and Muggle lovers.With great trepidation, HRH escape and run away, having procured one of the Horcruxes (the locket) from Umbridge. The chap who plays Rufus Scrimgeour does it well. (He appears earlier on when he comes to the Burrow to give HRH stuff they inherited from Dumbledore as left in his will).

Now the rift between Ron and Harry builds up. Ron's impatience in finding the remaining Horcruxes, his frustration at being the Chosen One's sidekick, and his suspicions regarding Harry's feelings for Hermoine take a toll on him and he leaves. Shaken, Harry and Hermione then decide to visit Godric's Hollow to try and find the sword of Godric Gryffindor which might prove to be helpful in the destruction of the Horcruxes. The trip, however backfires as Death Eaters in the guise of Bathilda Bagshot along with the serpent Nagini ambush them. The third LumpInTheThroat occurs here, when Harry sees for the first time in his life, his parents' graves. Harry and Hermione barely Dissaparate and escape and return to the jungles. 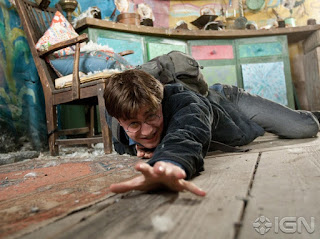 One night Harry is guided by a mysterious silver doe to a frozen pond in the middle of the jungle and there he sees the sword of Godric Gryffindor lying deep under water. He breaks through the ice and dives in, but the locket-Horcrux around his neck tries to strangle him. This is where Ron comes in again, and saves him and recovers the sword. It is him who destroys the Horcrux then and there. In the meanwhile Hermione gets some leads from the Tales of Beedle the Bard and identifies the recurrence of an enigmatic symbol. Harry remembers that Xenophilius Lovegood had worn a similar symbol at the wedding. So the three decide to go and visit the Lovegoods'. There, the eccentric old man then tells them the story of the Deathly Hallows ... the Elder Wand, the Ressurection Stone and the Cloak of Invisiblity and how three brothers of a certain folk tale went after each of them. This is followed by Xenophilius' attempt to sell off Harry to the Death Eaters in return for Luna who has been taken captive. HRH escape yet again.

The final battle happens in the underground vault in Malfoy Manor where the prisoners have been kept. The prisoners viz Luna, Ovillander and the Goblins (who were in charge of the Gringotts bank). HRH is joined by Dobby the House-elf who eventually saves them all from the Death Eaters in general and Bellatrix in particular, and sacrifices his own life instead (final and climactic LumpInTheThroat).

Parallel to this story, Voldemort goes on his quest to procure all the Deathly Hallows for himself. We are made aware of his movements and activities through his connection with Harry, in the form of visions and dreams. His first mission, to find the Elder Wand or the Death Stick takes him to the wand maker Gregorovitch whom he threatens for the information as to the wand's hereabouts. Gregorovitch tells him that Dumbledore had possessed it when he had died. The movie ends with Voldemort locating Dumbledore's grave, cracking open the coffin, procuring the Elder Wand and rejoicing. 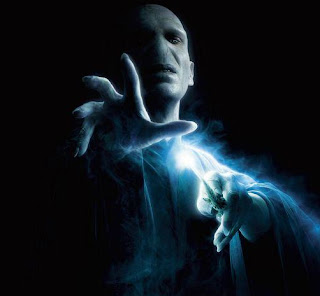 Of course, in case you are wondering, the story's not over yet.

All in all, finally a movie that does justice to the novel. Maybe splitting it into two parts was the key. Who knows, HP 4, 5 and 6 might just have been better in two parts. The ending is incomplete as it is expected to be. And sad, (Dobby, sniff). The beginning of the end has drawn to a close. A cliff-hanger of an ending is expected. And only a cliff-hanger will whet the appetite of the millions of fans all across the world. Hope David Yates finishes it off in the same vein in which he's begun.
accio Summer 2011.
Email Post
Labels: Harry Potter movies

Avada Kedavra said…
Just looooved this movie.. nice review btw.. this one was much much better than 5 and 6.. 6th was the worst of the lot.. but non-HP fans did not like the movie much since there wasnt much action this time.. many of my friends were not so happy after watching it.. For HP fans, it was simply amazing! :)
22 December 2010 at 23:36

Neetha said…
Absolutely second wrahool...especially with the seventh movie. Its the truest to the book, yet there are quite a few parts missing...One thing to point out though, Voldemort is interested in only the Elder Wand, he seeks it to destroy Harry. I don't think he's aware of the other two Hallows.
23 December 2010 at 01:31

Abhinav said…
I have to go against the general vein of thought here: I thought this movie was the worst of the lot. One hasty clarification: it's by no means a bad movie. It's a very, very good movie actually, but for me the first couple of films are the best in the series.

Couple of thoughts. I absolutely hated the horror movie cliches (Nagini's sneaky attacks, the typical scary sound effects) -they reminded me of Scream/I know what you did last summer/Nightmare on Elm Street etc and that is *not* a good thing to be reminded of. Oh, and I love horror movies, I just don't want them in my Harry Potter. I agree with your comment about the slow moving portions - dragged on a fair bit but then they weren't too out of place. As for unwanted romance being cut out, what was all that hogwash between Harry and Hermione? Now, *that* was out of place. People go on and on about the sixth movie being too rom-com-ish, but remember, the books have those parts too. It's a conscious choice they made to emphasize that all the characters are new adolescents!

Did anyone else think the music was terrible? What happened to the delightful tunes they'd composed for the first few films? I hear they have a different composer now, that might explain it.

OK, I think I might be giving off the impression that I have nothing good to say about the movie. It *did* get several things right - the humour was excellent and the pacing was generally good. It does seem to do more justice to the book than the others, but yer right that's only because it covers only half the book. Bring on the next one!
23 December 2010 at 11:00

Subhayan Mukerjee said…
@lone the horror movie cliches were mainly owing to make the 3D effects all the more amazing. Though I watched it in 2D, I guess they would have looked really well in 3D.

The Harry-Hermione hogwash was the only little bit of romance in the whole film. And that seems acceptable. But yes, it exaggerated it a lot.

Soumya said…
Lone, the music and the nervy, horror-movie feel is intended. Realize that this movie is not set in the usual Harry Potter comfort zone. It's outside Hogwarts, the 3 have no friends coming along, it's practically a road movie.

No offence. John Williams' music was incredible but this series' hallmark is that it evolves, the characters and situations all evolve, and grow darker with every installment. And Desplat's score was awesome in bringing in a new mood, a new tone to the saga at a point when the series is just about to end.
22 May 2011 at 10:37

Humaun Kabir said…
Thanks for sharing this with us! Some really amazing features.
http://www.youtubers.co/charlie-mcdonnell-girlfriend-bryarly-bishop/
2 August 2013 at 04:20