A Time Travel through Incredible India - 1 : A walk in a prehistoric park

This is part one of a three (or more) part tour-de-excellence through Madhya Pradesh, the very heart of the Indian subcontinent.

Indeed, when I set out for this journey, little did I know that this would turn out to be one of the most incredible travelling experiences I've ever been on - which is a significant thing, considering that Jammu-Kashmir and Kerala are the only two states in India that I haven't been to. So, I was both apprehensive yet expectant of the "wonders" that I would behold in the course of ten odd days.

With this and the next few blog posts, I wish to recount the experiences that I have had in the past few days, and hope to take you, the reader down to the very beginning of life on earth, to the roots of the present day homo sapien and some astonishing milestones of Indian culture - which still affects our day to day life in the 21st century. 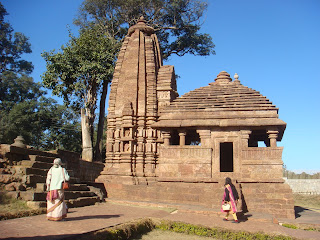 Our journey begins on the road, aboard a rattly Chevrolet Tavera, at Amarkantak. Amarkantak, situated in Madhya Pradesh, close to the MP-Chattisgarh border is home to some of the oldest Shiv temples on the planet. These are some outstanding works of art, dating back to 1000 AD - all sculpted out of stone. One look at the temples and one is compelled to wonder at the craftsmanship of the artisans who toiled with pickaxes and shovels and craved these brilliant architectural masterpieces, which have stood the test of time and seen medieval Indian history unfold alongside them. 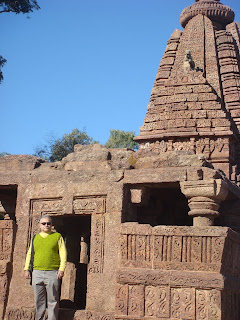 Amarkantak is also of geographic importance as the source of the great Narmada, which cuts through the rich igneous rocks of the Deccan plateau, between the Vindhya and the Satpura ranges, and empties into the Arabian Sea in Gujarat. Also, merely a couple of kilometers away from the source of the Narmada is the source of the Son river. What is startling is that the entire watershed region is such, that within a couple of kilometers, the altitude varies so much that, the Narmada flows westward  towards Gujarat, and that the Son flows North East-ward to join the Ganga in the great Northern Plains. 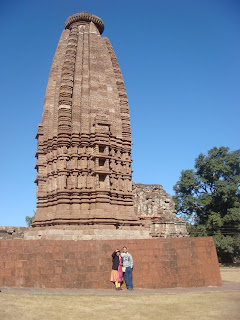 Leaving Amarkantak behind us, we travel westward, towards Jabalpur - National Highway 22. We cross the two towns of Dindori and Shahpur and then come to a fork and turn left. 14 kilometers down this road and we come to one of the most amazing, yet little known places in India. In fact, it's the only such place that we have in our country, and even outside India, very few of these exist. 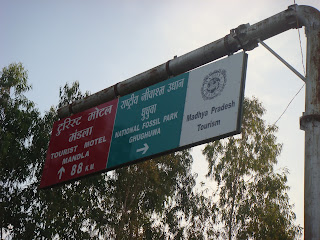 The National Fossil Park at Ghughua, is a rare, an extremely rare example of an entire tropical evergreen forest being petrified over millions of years - resisting all forms of biological decay while at it. Carbon dating has estimated that these plant fossils date back to the late Cretaceous and the early Tertiary period in the geological timescale. That is more than 65 million years ago. Which is, well, a hell lot. Considering that dinosaurs had just become extinct then, and that the closest ancestor to the modern man was still many millions of years away.

These fossils are predominantly of the prehistoric date palm and banana. This treasure trove of natural history was unearthed by a Dr Dharmendra Prasad, the statistical officer of the Mandla district of Madhya Pradesh, and after realizing the significance of this natural wonder, the Government of India declared this as a National Park in 1983.

(Click on the pictures for full blown 8 mega pixel resolutions.)

Geological studies on the fossils excavated have proved several theories of continental drift. The fact that the fossils are predominantly of evergreen plants imply that 65 million years ago, this region of India enjoyed a warm humid climate with plenty of rainfall all year around. Also, the discovery of a number of eucalyptus tree fossils have verified that the Deccan plateu and present day Australia (which have eucalyptus forests to this date) shared the same landmass - that of the ancient Gondwanaland. Seeing the fossils - million-year-old plants turned to stone - over the years - lying where they once stood, witnessing the evolution of planet earth happening all around them - the changing landscapes, new species appearing and dying out, the early primates first learning the art of working with tools, the discovery of fire, the appearance of the first homo sapien - is exciting enough to send a shudder up one's spine!

After a surreal experience, which I'm thankful to have witnessed, we board our rattly old Chevy and head to Jabalpur.

Part two of our journey - the enchanting marble rocks of the Narmada valley in Jabalpur will be taken up in the next post. :)