A Time Travel through Incredible India - 3 : Cave paintings of the early man

This post was also published for Youth Ki Awaaz here.

After the visual treat that was the Narmada valley, we leave Jabalpur and move on to the capital city of Madhya Pradesh - Bhopal.

Now there isn't really much to see in Bhopal except for a couple of really huge lakes, which have given Bhopal, the name - city of lakes. However Bhopal is close to two extremely important tourist spots, both of which are important enough to have been declared as World Heritage Sites.

The first one is far less known than the second, but is equally as enchanting in a different way, and forms the content for this post. It is only 45 kilometers to the south of Bhopal, but the road conditions are bad enough to make a Humvee think twice before venturing ahead. Which affected our rattly old Chevy rather badly, for the information - resulting in two consecutive punctures. 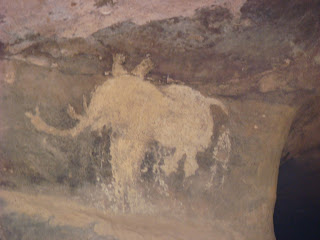 This place is known as the Bhimbetka, and it is home to some of the oldest cave paintings known to man. Ten thousand years or more ago, these rocks were shelters to the early man, and in his .. er ... past time (?) the early man painted on the walls of these rock shelters. Overlapping and superimposition of paintings imply that these rocks were used as canvas for art by different people from different periods - from the Upper Paleolithic, through the Mesolithic and Chalcolithic periods, right up to the early historic to the very recent Medieval age.

These rock paintings were discovered by a VS Wakankar in 1957 when he saw some unique rock formations while traveling by train. Hundreds of such rock shelters where discovered of which fifteen caves have been opened for sightseeing.

Most of these paintings depict  animals like bison, boars, horses, lions while others depict the culture of the early homo sapien, their festivals, rituals and the like. It really is marvelously, considering the fact that at this juncture in pre-history, the early man was coming out of an animal-like existence and learning the art of self expression in the form of art, that which has survived till today. I am embedding a slideshow here, do click on the slideshow and view the photos in all their glory in picasa. They really are incredible.

Also, the name Bhimbetka comes from Bhima, the strongest of the Pandavas in the Mahabharata - during the Pandava's 12 year exile, Bhim had apparently resided in this region - and hence Bhimbetka - the seat of Bhima.

That is it for this post. The next post shall take us to Sanchi, also 40 odd kilometers from Bhopal, in another direction - the home of the historic Stupas and the iconic Ashok Stambha, the national emblem of India.

Prithwis said…
these are paintings from the dawn of human "history" when man was transitioning from his (or her) apelike ancestors and getting into 'higher' stuff like art
28 December 2011 at 09:51